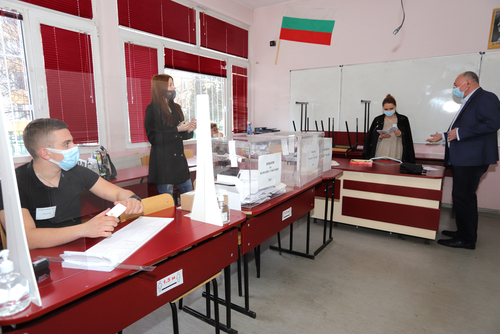 Brussels (Brussels Morning) Bulgaria seems to be edging nearer to snap summer polls, as the country’s new anti-establishment party announced on Monday it will not be attempting to form a government, after the failure of the relative winners  to do so themselves, Reuters reported.

The leader of the There Is Such A People (ITN) anti-establishment party, former TV host and singer Slavi Trifonov, said his party lacked sufficient seats in the new Bulgarian parliament to form a stable majority. He rejected offers from the established political parties to enter into coalition with them.

“The support offered to us comes from political factions which are harmful, greedy and proven to be compromised”, Trifonov declared on Monday. “What they offer is not support, but dependence”. The ITN leader announced he would nominate chess champion Antoaneta Stefanova for prime minister, and that she will immediately return the mandate to the president once she receives it.

ITN emerged as the second strongest party after parliamentary elections earlier this month.  Prime Minister Boyko Borissov’s centre-right GERB claimed relative victory, despite a significant loss of seats compared to previous elections. GERB abandoned any hopes it might have had of forming a coalition last week, as the majority of parties rejected Borissov’s coalition offers.

Trifonov rejected cooperation with both GERB and the leftist BSP for Bulgaria alliance, which came third in the elections. Once ITN returns the mandate to President Rumen Radev, he will offer the mandate to another party of his choosing. However, neither of the remaining parties has a realistic chance of gathering the necessary support in the parliament.

Should the third party fail to form government, Radev would be forced to appoint an interim government and call for new elections within the following two months – most likely to be held in June. This delay in forming a stable government could prove a setback for Bulgaria’s plans for drawing upon its share of the EU’s coronavirus recovery fund.