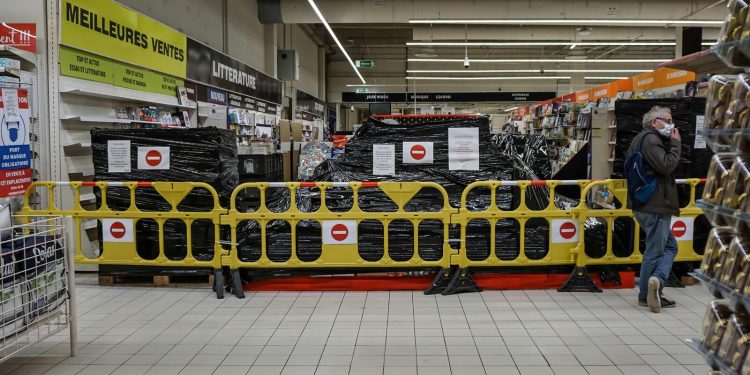 Brussels (Brussels Morning) Some 20 trade unions in France are calling on the authorities to reverse the trading ban on 13 November, arguing that the ban unfairly targets small shops while allowing supermarkets and online stores to operate, RFI reported Tuesday.

The retailers’ union, the Movement of the Enterprises of France (MEDEF) and the General Confederation of Small and Medium Companies (CPME) issued a joint statement warning that 1.2 million salaries and self-employed jobs are in jeopardy because of the trading ban. The unions called for urgent aid for businesses that have to close and demanding fairness while acknowledging the importance of solidarity in the fight against the coronavirus pandemic.

While schools remain open during the second lockdown in France, non-essential businesses have been ordered to close, an edict that applies to bars, restaurants and shops. People are permitted to leave their homes in order to go to work, to take brief exercise breaks, to do grocery shopping and to keep medical appointments.

Yesterday, Tuesday, Prime Minister Jean Castex announced that larger stores would no longer be allowed to sell products that are sold in small stores, such as books. The Federation of Commerce and Distribution (FCD) criticised the move, pointing out that it makes little sense as it would not improve the health situation while complicating the lives of citizens. Instead, the FCD suggested the authorities should consider reopening small stores on a gradual basis.

Despite appeals to the contrary, Minister of Solidarity and Health Olivier Véran rejected the possibility of reopening small shops, bookshops in particular. Numerous mayors, including the Mayor of Paris Anne Hidalgo had urged him to reconsider. Véran agreed that Amazon has an unfair advantage over small shops and retailers, but reiterated that reopening them is out of the question since the health crisis must take priority.

Speaking to BFM on Sunday, Minister of Economy and Finance Bruno Le Maire said he understood the concerns of business owners. However, he noted that the government had announced support worth 15 billion euro for companies and workers, RFI reported on Sunday. Le Maire concluded that health must remain the top priority.

Backed by the Association of French Mayors (AMF), the mayors of Beaune, Brive-la-Gaillarde, Chalon-sur-Saône, Colmar, Perpignan and Valence unilaterally decided to allow non-food shops to remain open, despite government criticism of the move.