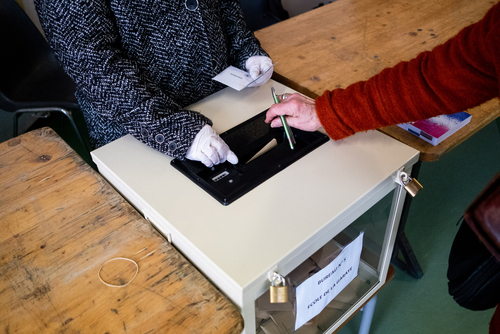 DINAN.FRANCE-03152020 : vote of the first round of the municipal and community elections with the sanitary precautions of the coronavirus.

Belgium (Brussels Morning Newspaper) French university students took to the streets of Paris on Thursday, occupying or blocking buildings in protest against incumbent President Emmanuel Macron and far-right leader Marine Le Pen being the only remaining options in the French presidential elections.

Hundreds of French students held their protest at the Sorbonne University in Paris, throwing leaflets from windows and chanting “we are all anti-fascists”. They hung up a banner outside the university building saying “Sorbonne occupied against Macron, Le Pen and their world”.

At the Sciences-Po, the students barricaded the main entrance to the elite political sciences institute using trash cans and banners. Paris police reported multiple barricades and incidents at several of Paris’ universities on Thursday, and had even used tear gas to prevent more students from joining in the protest at Sorbonne.

Many of the left-wing students protesting voted for the far-left France Unbowed (LFI) candidate Jean-Luc Mélenchon, who came just a single percentage point behind Le Pen in last week’s first round of presidential elections.

Some half of Mélenchon’s voters ultimately voted for Macron in 2017, believing him to be the “lesser of two evils,” though some have voted for Le Pen in protest against the former Rotschild banker perceived as a “candidate of the rich”. Many more abstained from the vote. Come 24 April, Mélenchon’s voters will likely be the ones deciding the next president.
But for many left-wing voters, choosing between Macron and Le Pen is no choice at all, and could ultimately stay at home instead of voting. “We now have a second round with only two right-wing candidates,” Sciences-Po student Gabriel Vergnes told AP. “They are the enemies of the workers and of the youth, and we can’t accept that, we can’t accept five more years of austerity and pollution.”