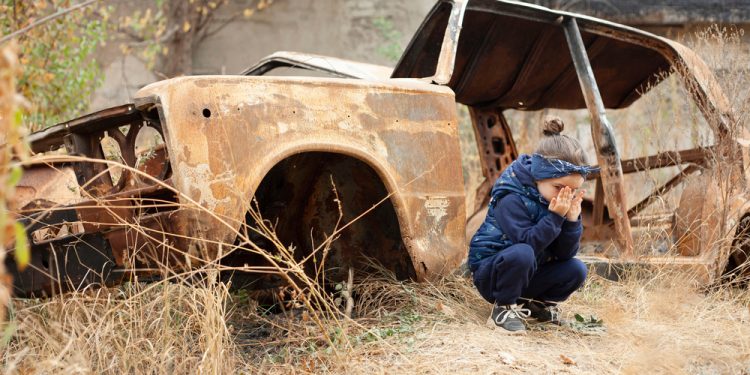 A little girl is crying near the burnt car. War in Donetsk. War Nagorno-Karabakh. Burned-out car.

Brussels (Brussels Morning) Azerbaijan’s parliament has called for France to be stripped of its role as mediator in the Nagorno-Karabakh conflict after the French senate adopted a resolution to support the region’s independence, Reuters  reports.

The French senate adopted the resolution on Wednesday, after the latest ceasefire brokered by Russia ended weeks of fighting. Azerbaijan hailed this as a victory, having recovered control of parts of the region held by Armenians since the 1990s.

The Ministry of Foreign Affairs of Azerbaijan pointed out that the resolution has no legal force, but tarnishes France’s reputation as a mediator and raises questions about its neutrality.

The Azerbaijani parliament called on the government to review its relationship with France and demand that the French lose their position as co-chair at the Organisation for Security and Co-operation in Europe Minsk Group.

This would leave only Russia and the US at the helm of the Minsk Group, which was founded in 1992 to mediate in the Nagorno-Karabakh conflict.

On Wednesday, France’s Minister of Europe and Foreign Affairs Jean-Yves Le Drian dismissed the senate resolution, pointing out that it was not in line with France’s neutral position. Moreover, he noted that not even Armenia had recognised the region’s independence.

Meanwhile, Armenia’s Prime Minister Nikol Pashinyan welcomed the resolution as an important step towards recognising the right to self-determination of the people in Nagorno-Karabakh.

Given that France has between 400,000 and 600,000 citizens of Armenian origin, President Emmanuel Macron’s efforts to remain neutral have drawn criticism for not offering more support to Armenia.

The French senate’s message of support to people of Armenian origin in France came in the wake of increased aid efforts to help people fleeing from Nagorno-Karabakh, AP reported Wednesday.

An aid package airlifted from from France landed in Armenia on Monday, with another flight to bring medical supplies and other assistance due later today, Friday.

While Azerbaijan has criticised France for siding with Armenia, the French senate’s resolution calls on the government to push for a tougher EU stance towards Turkey for supporting Azerbaijan in the conflict as well as demanding an international investigation into possible war crimes in the region.