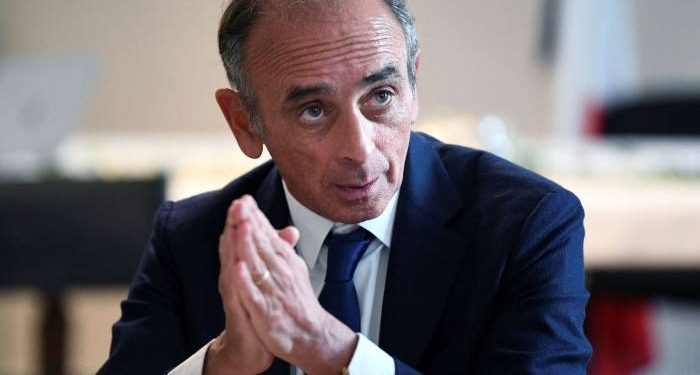 Brussels (Brussels Morning) French presidential candidate and far-right pundit Eric Zemmour, was fined 10,000 euro on Monday for inciting racial hatred with comments he made on the right-wing CNews TV channel in 2020.

Zemmour launched into a rant during a 2020 talk show, criticising unaccompanied minors who come to France as migrants. “They’ve got no reason for being here, they are thieves, they are killers, they are rapists, that’s all they do, they should be sent back”, Zemmour exclaimed.

The far-right candidate was found guilty by a Paris court on Monday and fined 10,000 euro, which he plans to appeal. Zemmour’s attorney, Olivier Pardo, argued in his defense that he cannot be convicted of inciting “racial hatred”, because “an unaccompanied minor is neither a race, nor a nation, nor an ethnicity”.

Zemmour launched his presidential bid in late November last year with an emotionally-charged video appealing to French citizens afraid of the “foreign languages” they hear on the streets. Earlier in November, he was polling in second place behind incumbent President Emmanuel Macron, a showing suggesting he was the most likely candidate to face Macron in the second round of presidential elections. However, a series of scandals since then has eroded his popular support.

The French tabloid magazine Closer published claims that the 63-year-old “defender of family values” had made his 28-year-old campaign aide pregnant. This cost Zemmour popularity, dropping him to fourth spot in the polls. He was left trailing behind the Republican party candidate Valerie Pécresse and the right-wing National Rally (RN) leader Marine LePen. Pécresse, currently tied in second place with LePen, is currently the only candidate capable of  potentially unseating Macron in the second round, according to latest polls.