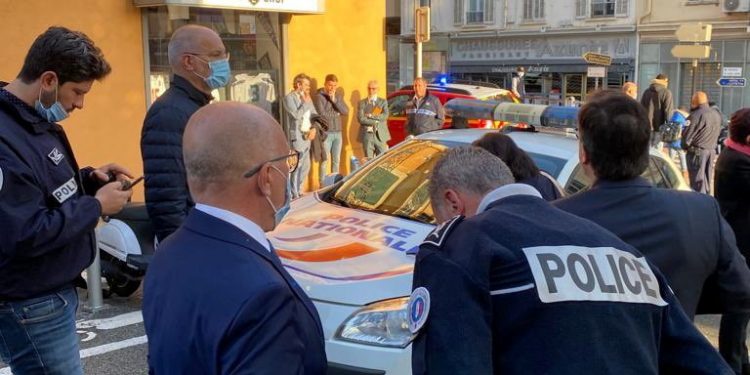 Member of French parliament Eric Ciotti visits the police station where, according to reports, a police official was injured after being stabbed with a knife, in Cannes, France, November 8, 2021. Twitter/ECiotti/via REUTERS

Brussels (Brussels Morning) A French policeman survived a knife attack in Cannes today. According to a police source, the assailant said he did it “in the name of the prophet.”

Reports from the newspaper Le Figaro and from BFM TV said the attacker was an Algerian with an Italian residency permit, according to Reuters .

Interior Minister Gérald Darmanin, announcing that he would visit Cannes, said the policeman was unharmed thanks to the bulletproof vest he was wearing and that the assailant had been “neutralised” by other police officers.

The Mayor of Cannes, David Lisnard, described the attack as “sickening”, while MP Éric Ciotti said it was a terrorist attack. The local prosecutor and the national anti-terrorism prosecutor are leading the investigation.

A police source cited by BFM TV recounted how the assailant approached a police car parked in front of a police station, opened the door and stabbed the driver with a knife.

The broadcaster and the regional daily Nice-Matin noted that, according to one police source, the attacker then tried to attack the other occupant of the vehicle, but was prevented by a third police officer who shot at and seriously wounded the assailant.

The source reiterated that the attacker proclaimed he carried out the assault “in the name of the prophet”, an indication that the attack was linked with Islamist terrorism.

The attack coincides with the Paris terror trial of Salah Abdeslam, the only surviving member of the Islamic State terror cell that carried out the 2015 Paris attack that killed 130 and injured 683.The Cannes attack was carried out as France’s President Emmanuel Macron is looking to convince voters that the government has violent crime and national security under control some six months ahead of the presidential election slated for April next year.