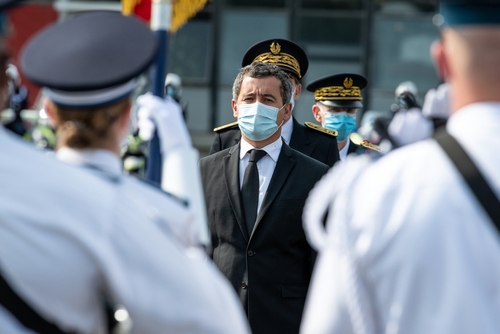 Brussels (Brussels Morning) French Interior Minister Gérald Darmanin announced he would join a police protest outside the National Assembly on Wednesday, supporting their demand that the government get tougher on those who commit violent acts against police officers, RFI reported.

Darmanin’s presence at a public protest – a first by a French minister – is intended to serve as a show of support for the police officers, dismayed at the recent killing of a colleague during a narcotics operation in Avignon.

Police union leaders organising the protest emphasise that the police are “angry and disgusted” at the death of 36-year old Eric Masson, a father of two. They note his killing is yet another example of violence against police officers that must be met with a “criminal response”.

French media covering the protest described Darmanin’s presence at the rally as both a bold political move and a physical risk, as it entails his being among crowds who are also protesting about his track record as Interior Minister. Ahead of the rally, Darmanin tweeted a pledge to create an additional 10,000 police and gendarmerie postings over the next five years.

As police unions invited citizens to join them in protest and show their solidarity with the police, a number of political figures also announced their plans to join in the protest. Security has recently emerged as one of the key campaign issues ahead of France’s upcoming local elections.

The French police were shaken by the death of Masson, especially as it came after another shock in April, when Stéphanie Monfermé, an administrative officer working at a police station in Rambouillet, outside of Paris, was killed.