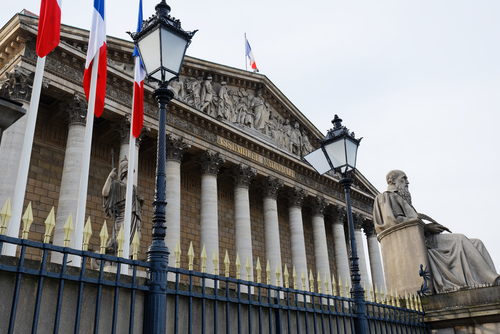 The French national Assembly-Bourbon palace the lower house of the parliament , Paris, France.

Brussels (Brussels Morning) The lower house of the French Parliament overwhelmingly approved the new anti-radicalisation bill on Tuesday, in a bid to safeguard France from radical Islamists and to promote respect for French values, AP reported.

The bill, put forward by President Emmanuel Macron who claims he seeks to reaffirm France’s commitment to secularism, passed with 347 votes in favour and 151 opposed, with 65 abstentions. It is expected to breeze through the conservative-controlled Senate as soon as it is put to the vote there, a move that is not scheduled to happen before 30 March.

The bill, formally named “Supporting respect for the principles of the Republic”, has been colloquially called the “anti-radicalism” bill, according to its stated intentions, or the “anti-Muslim” bill as it has been dubbed by its most vocal critics.

Aiming to affect most aspects of French life, the bill would strengthen oversight of mosques, schools and sports clubs to prevent youth radicalisation. It would ban virginity certificates and crack down on polygamy and forced marriage.

The bill would also mandate that all children must attend regular schooling starting at age three, in order to prevent or curtail ideological home schooling, and it would provide secularism training for all public employees.

A section of the bill referred to as the “Paty law”, having been named after murdered school teacher Samuel Paty, would make it a crime to knowingly endanger someone’s life by providing details of their private life and location. Paty was decapitated for showing cartoons depicting the prophet Mohammed to school children after information on where he taught had been posted online in a video.

The bill’s sponsor, Interior Minister Gerald Darmanin, is endeavouring to show that the government is tougher against Islamic extremism than is the far-right. Right now, National Rally leader Marine Le Pen is polling stronger than Macron ahead of the 2022 presidential elections.
The bill’s critics contend, however, that it infringes unduly on individual freedoms, and that it singles out Muslims by pointing a finger at Islam as a major threat, even though it is the country’s second largest religious denomination. Moderate Muslims fear they might become stigmatised, while other minority religions fear they too might be negatively impacted by the bill, as well.