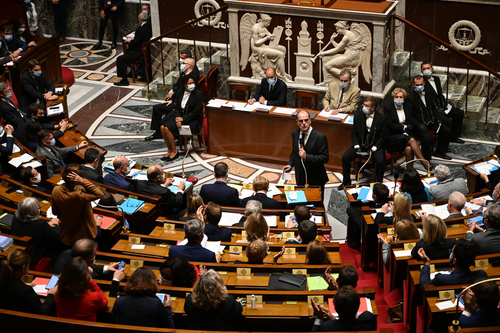 Belgium (Brussels Morning Newspaper) All French left-wing parties have agreed to form a broad coalition ahead of the upcoming parliamentary elections in June, in a bid to secure a majority and force the newly-reelected President Emmanuel Macron into cohabitation with the left.

France’s Socialist Party (PS) was the last to join the coalition on Friday, after the far-left France Unbowed (LFI) already struck a deal with the French Greens and the Communist Party of France.

The deal would see the socialists, historically one of the two major parties in France in the decades before Macron’s first electoral victory, take a back seat to LFI, whose presidential candidate Jean-Luc Mélenchon was a percentage point short of facing Macron in the second round of presidential elections.

The new coalition will be named the New Popular Union, and would likely be significantly less pro-European, riding on LFI’s policies, than the Socialists and the Greens have ever been in the past.

While campaigning for president, Mélenchon claimed that several EU treaties are incompatible with his programme, including all free trade agreements opposed to environmental protectionism. Mélenchon pledged to implement his policies even if there were in breach of EU regulations. Most notable, Mélenchon expressed his opposition to both the NATO and the common European defence policy.

For many traditionally pro-European socialists, whose presidential candidate Anne Hidalgo won just 1.7% of the votes in the first round of elections, the alliance with LFI is a step in the wrong direction, with several party veterans deciding to leave the party or considering the move.

Macron’s newly-renamed Rennaisance party was projected to win a majority in the upcoming elections, but the polls haven’t yet accounted for the new left-wing alliance. While all recent parliamentary elections returned a majority for the sitting president, a loss of majority in the parliament would force Macron to appoint a prime minister coming from another party, and would see his presidential powers significantly curbed.