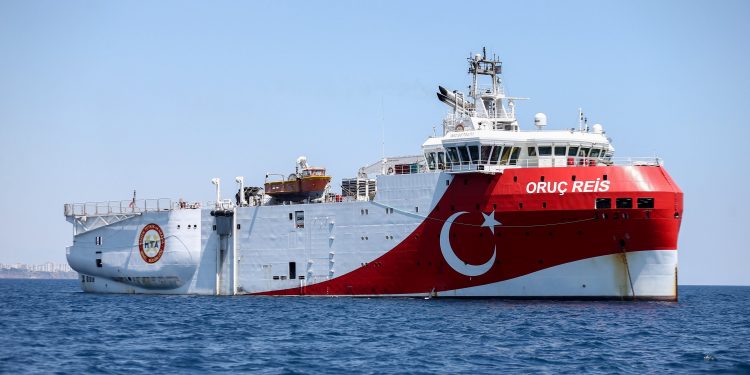 French President Emmanuel Macron hosted a meeting in Corsica on Thursday with leaders of Italy, Malta, Portugal, Spain, Greece and Cyprus to discuss growing tensions over Turkey’s Mediterranean oil and gas ambitions, RFI reports. France has backed Greece and Cyprus in their standoff with Turkey over energy resources and naval influence in the Mediterranean, a dispute that has given rise to fears of conflict.

Turkey deployed its exploration vessel Oruç Reis to map out oil and gas drilling prospects in south-east Mediterranean waters that the two EU member states lay claim to. Greece responded by staging naval exercises. Cyprus and Italy took part in the exercises which took place at the end of August and were also joined by France.

Several EU member states are expected to push for sanctions against Turkey at the upcoming EU summit on 24-25 September. Last weekend, France’s Minister of Europe and Foreign Affairs, Jean-Yves Le Drian , indicated that sanctions are an option.

On Thursday, President Macron pointed out that EU member states should take a united position on Turkey. However, he also cautioned that the EU wanted to avoid further possible escalation in tensions with Turkey, an aspiring member state, Reuters reports. Macron stressed that Turkey needs to clarify its intentions.

After the Corsica meeting, the EU’s seven Mediterranean member states announced that new EU sanctions being drafted for use against Ankara will come into force should Turkey fail to come to the negotiating table by end September to resolve its territorial dispute with Greece and Cyprus. The Mediterranean EU member states confirmed full support for Cyprus and Greece in the face of the repeated infringements of their sovereignty. In a joint statement, they warned that the EU is prepared to deploy additional restrictive measures against Turkey unless it stops its unilateral activities.

Greek Prime Minister Kyriakos Mitsotakis made clear there is time for Turkey to end its exploration activities in the disputed waters before the scheduled month’s end EU summit. Turkey’s attempt to divide Europe, he said, would fall short, noting that Greece has been fulfilling its obligation in protecting EU borders and that Athens expects solidarity.