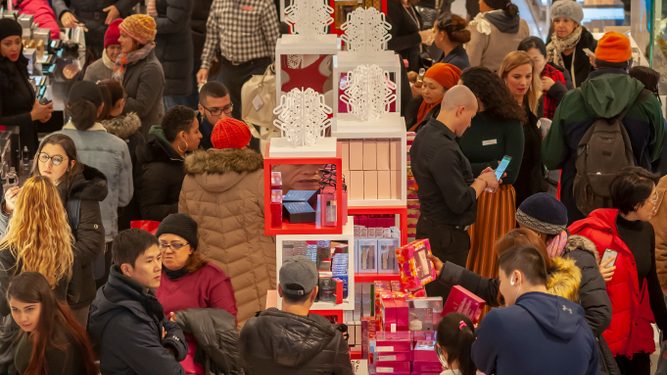 Hordes of shoppers throng the Macy's Herald Square flagship store in New York looking for bargains on the day after Thanksgiving, Black Friday.

According to newly imposed restrictions aimed at curbing the spread of coronavirus, bars, restaurants, hotels and entertainment venues must close in both countries. German authorities have allowed retail stores to remain open, but non-essential stores in France have been forced to close and will be allowed to reopen under strict epidemiological protocols on Saturday.

The French National Institute of Statistics and Economic Studies (INSEE) noted that the consumer confidence index dropped from 94 in October to 90 in November, a steeper drop compared to the one predicted by economists in a Reuters poll. France imposed the new lockdown at the end of October, with consumer confidence plunging to its lowest level since December 2018.

With concerns about future unemployment reaching the highest level since 2013, consumers are uncertain about their financial prospects. Given the steep drop in consumer confidence, economic recovery driven by consumption is deemed unlikely before 2021. The data show that the number of people who now believe it is a good time to save is significantly above the long-term average.

The German Society for Consumer Research (GfK) pointed out that the consumer sentiment index dropped from negative 3.2 in October to negative 6.7 in November, a much steeper drop than that predicted by the economists who took part in the Reuters poll.

GfK consumer expert Rolf Bürkl pointed out that the growing number of confirmed coronavirus infections was adding to the general uncertainty, which, coupled with the closing of bars, restaurants, hotels and entertainment venues, prompted Germans to hold onto their money. He concluded that the early summer hopes for a quick recovery had been squashed.

Germany’s Chancellor Angela Merkel and heads of German states agreed on Wednesday to extend the national lockdown until 20 December. France’s President Emmanuel Macron announced the start of gradual easing of restrictions this weekend, but stressed  that many restrictions will remain in place.