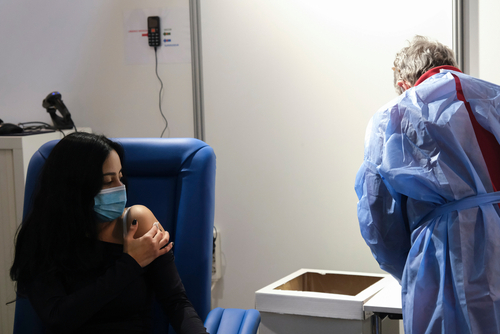 Belgium, (Brussels Morning Newspaper) French motorists have formed their own version of the Canadian “Freedom Convoy” on Thursday in protest against vaccine-related mandates.

The protest in Canada against government-imposed restrictions prompted authorities in Ottawa to declare a state of emergency earlier this week, as reported by France24 on Thursday.

The Canadian Freedom Convoy first hit the streets when authorities there imposed a vaccinate-or-quarantine mandate on truckers crossing the Canada-US border, but then it grew into a broader protest against government policies in general.

The French Freedom Convoy started in the south of the country and is now heading to Paris where it is expected to demand the scrapping of vaccine passes. Paris police announced they would prevent the convoy from entering and blocking the city.

Police have stated that the protest is banned from Friday to Monday because of the “risk” of public order disturbances.

Since some protesters called for taking the convoy on to Brussels after Paris, authorities in Brussels have imposed a ban on protests to keep the convoy at bay should it proceed to the Belgian capital.

French presidential candidate Marine Le Pen stated her support for the convoy in an interview, where she described it as “another form of the Yellow Vest demonstrations.”

The protests were organised largely online. Starting from a specific demand, they grew into expressions of broader disdain for government policies, and each comprises members from all parts of the political spectrum.

Protester Xavier Le Gregam pointed out “we are being robbed of a lot of freedoms under pretexts that have nothing scientific and even less medical.” This needs to stop, he declared, “because otherwise the future is likely to look very bleak.”

University of Sorbonne professor Jean-François Amadieu commented that the convoy, was ” not only anti-vaccine pass… there are other grievances on the subject of individual liberties as well as echoes of the Yellow Vest calls for a citizens’ initiative referendum.”

Protester Sylvain de Rochettes took issue with those describing the convoy as “anti-vax”, insisting that he was not opposed to the vaccine but rather was “against compulsory vaccination, the systemic aspect.”

On Wednesday, French government spokesman Gabriel Attal said that citizen  “wariness” about government-imposed restrictions is understandable, but noted that France is among the EU member states with “the fewest restrictions infringing on citizens’ freedom.”

He was confident that vaccine passes would be scrapped “as soon as there is a normalisation of the situation inside hospitals.”