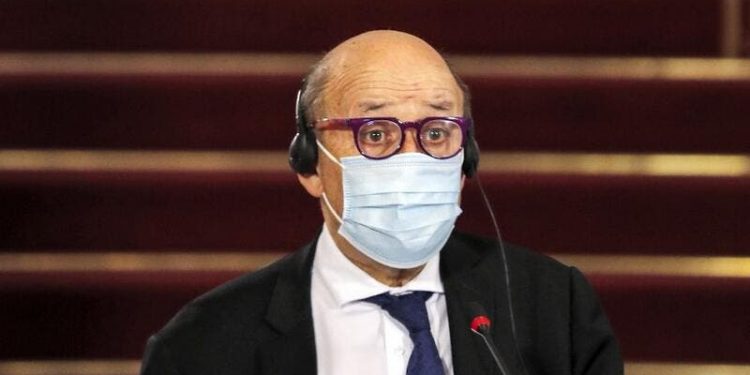 Brussels (Brussels Morning) French Minister of Europe and Foreign Affairs Jean-Yves Le Drian visited Cairo on Sunday in an attempt to defuse tensions between France and the Muslim world, Reuters reports. Tensions have been rising since France’s staunch defence of freedom of expression, notably the freedom to publish cartoons of the prophet Muhammad.

Le Drian visited Egypt in the wake of jihadist attacks in France, apparently caused by offence over the controversial caricatures and France’s defence of the right to caricature.

After meeting with President of Egypt Abdel Fattah el-Sisi and Minister of Foreign Affairs Sameh Shoukry, Le Drian pointed out that the anti-French campaign in the Muslim world often stemmed from a distortion of French President Emmanuel Macron’s statements on the issue.

Le Drian insisted that France respects Islam and that Muslims are part of French society. France, he said, is facing a terrorist threat on its soil, just as other countries are fighting the same battle.

Commenting on his meeting with Ahmed el-Tayeb, Grand Imam of Al-Azhar, Le Drian pointed out that they had a long and very frank exchange. He had commented on points of convergence in their respective analyses and the importance of speaking up for balance, tolerance and moderation, Le Drian said.

He had stressed that the fight against extremism is a battle France was fighting just as Egypt and other countries were. In this respect, he noted that the Grand Imam had suggested they improve cooperation in pursuit of convergence.

After the meeting, el-Tayeb stated that he had said any insult against Muhammad was unacceptable. Moreover, he said he was against freedom of expression when it offends any religion. He had refused to describe terrorism as Islamic, stressing that terrorists do not represent Muslims and concluding that Muslims are not responsible for such actions.

President el-Sisi had stressed the importance of promoting coexistence and tolerance among religions, AP reported Sunday.

Just last month, el-Tayeb called for the universal criminalisation of discrimination against Muslims, and had urged Muslims to use peaceful and legal means to fight “hate speech.” He condemned the jihadist attacks in France and described the decapitation of teacher Samuel Paty, who had shown caricatures of Muhammad in a class on free speech, as an odious and painful murder.