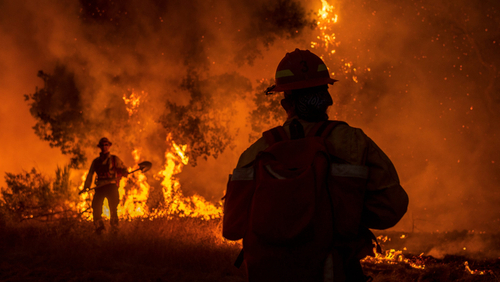 Brussels (Brussels Morning) French firefighters continued to fight the wildfire near Saint-Tropez for the third day on Wednesday, with roughly 1,200 firefighters deployed.

The fire has destroyed approximately 5,000 hectares of vegetation since it broke out on Monday in the Plaine des Maures nature reserve northwest of Saint-Tropez, according to RFI reporting on Wednesday.

Franck Graciano, spokesman of the Var department fire brigade, pointed out that the wildfire did not spread during the night, but stressed “that does not mean it is under control.”

French authorities evacuated some 7,000 people from the area by Tuesday due to high winds and temperatures. Approximately 1,300 people were evacuated from a nearby camping area and others fled from La Garde-Freinet village, around 15 kilometres northwest of Saint-Tropez.

Comments on the blaze

Thomas Dombry, Mayor of La Garde-Freinet commented on the wildfire, stressing “we’ve never seen it spread with such speed, it was three or four times the usual.”

Concha Agero, Deputy Head of the French Office of Biodiversity, pointed out on Tuesday that “half of the Plain des Maures nature reserve has been devastated.”

French President Emmanuel Macron commented on the efforts to contain the wildfire on Tuesday evening, stressing that “the coming hours will be absolutely decisive.”

“The battle is ongoing and the fire has not yet been contained,” he noted and pointed out that concerted efforts helped to “avoid the worst” and that no casualties had been reported.

The fire appears to have started close to a motorway stop approximately 30 kilometres northwest of Saint-Tropez.

The Mediterranean region has been experiencing a heat wave, with wildfires breaking out in Albania, Algeria, Bulgaria, Greece, Israel, Italy, Morocco, North Macedonia, Portugal, Spain, Tunisia and Turkey this year.

Seasonal wildfires hit the Mediterranean during hot and dry weather in the summer, with climate scientists warning that such wildfires will become increasingly common due to global warming.