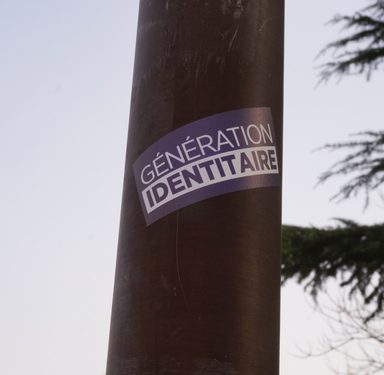 Albi, France - Feb. 2021 - A blue and white sticker from Génération Identitaire, a right-wing youth movement opposing the migratory invasion and the Islamization of Europe, pasted on a lamp post pole

Brussels (Brussels Morning) The far-right National Rally (RN) suffered a severe setback in France’s regional elections on Sunday, performing far below pre-election poll predictions and its own expectations. Instead of emerging at the top in several regions, the party barely edged ahead in a single region, and even there, the final result has yet to be decided in a runoff vote.

For party leader Marine Le Pen’s hopes of toppling President Emmanuel Macron in next year’s presidential elections, the results came as a cold shower, reflecting as they did the recovery of the centre-right Republicans party (LR).

Despite ongoing corruption trials of the party’s founder, former president Nicolas Sarkozy, the Republicans emerged as the strongest party regionally. Exit polls gave them approximately 27.2% of the national vote, ahead of Le Pen’s RN with 19.3%.

Despite its second place showing, the RN results are more than 7 percentage points worse than they achieved in the 2015 regional election, a clear indication that the party failed to retain its voters and attract fresh support.

Preparing for next year’s presidential election and a rematch of her showdown with Macron, Le Pen had worked hard on pushing the party towards the centre, toning down extremist rhetoric and softening its anti-EU stance. However, the strategy seems to have failed to win over Republican voters, and may even have helped the centre-right party.

The results are also seen as a slap in the face for President Macron, whose Republic on the Move (LREM) party finished fifth in the national vote with a mere 11.2%, trailing behind the Greens and the Socialists.
The Republicans had the best results in the north, giving fresh impetus to its coalition’s regional candidate Xavier Bertrand, who also has an eye on the 2022 presidential election. Currently polling in third place behind Macron and Le Pen, the sudden recovery of the centre-right could give Bertrand a serious shot at the runoffs next year.