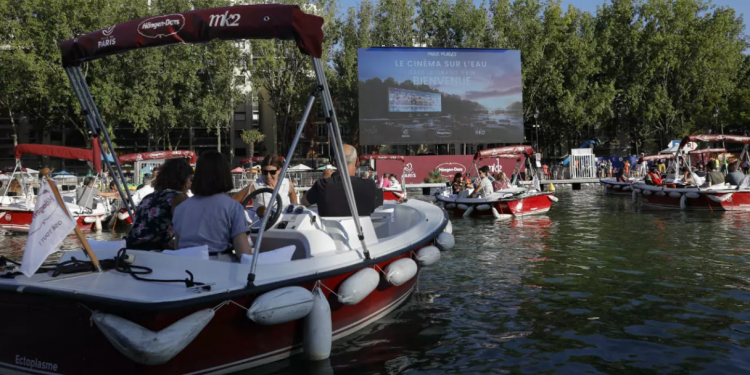 By Tracy MCNICOLL for France 24, French cinemas reopened on June 22 with a certain pomp after a three-month coronavirus hiatus. At least one Paris movie house, Les 5 Caumartin, had eager moviegoers lined up for that much-anticipated reawakening with a screening a minute after midnight. But a month later, cinemas in the birthplace of the medium are feeling the effects as a global industry remains in slumber.

The French box office saw more than a million people head to the cinema last week, for the first time since theatres reopened their doors. But the 1,169 million spectators, according to figures tabulated by CBO Box-office, still represent a 78 percent drop compared to the same period last year.

“During a so-called normal month of July, weekly attendance would be at two, three, even four million and here, right now, it’s a struggle to surpass the symbolic million,” FRANCE 24’s French-language movie critic Thomas Baurez explained. “It’s the American ‘locomotives’ that are missing and so, of course, the fate of world cinema, of the whole industry, is linked to the fate of the United States, a country severely affected by coronavirus. You could say that this Americano-dependence is pretty worrisome and shows an international industry short on oxygen.”

For cinema operators, it’s a whole new world and a way of doing business rife with uncertainty. “I don’t look at the numbers anymore [but] it mustn’t last too long,” Aurélie Delage, who runs the Cinémascop Mégarama in Garat, a city of 2,000 in southwestern France, told AFP. Last summer, families flocked to see “The Lion King”. But those figures look like a distant dream in the summer of 2020.

“People were inside during the lockdown. They want to be out in the fresh air, at a bar or a restaurant, especially as long as the weather is nice,” said Delage. With attendance low, she thought about shutting down again, but won’t do it. “It would be catastrophic. Audiences need a frame of reference,” she said.https://player.vimeo.com/video/430427397

With 90 percent of cinemas open in France despite the low receipts, the head of the National Federation of French Cinema (FNCF) suggested the cinema operators staying open were doing so as a public service. “Right now, they are losing an enormous amount of money,” FNCF chief Richard Patry told France Info. Theatres have new French films to show, but no American movies, which generally represent 70 percent of the French summer box office, Patry said. “We are very, very pessimistic. Even a little depressed,” he conceded. “Nevertheless, we must look on the bright side now and again to try to reassure ourselves. Four-and-a-half million spectators have come during the first month after reopening.”

To a point, the slump was foreseeable. The big-budget summer blockbusters that French movie theatres count on to thrive through the sunny months are the same ones cinemas across the world depend on in the global marketplace. “Donald Trump is ruining the summer for French cinemas”, Slate France headlined just a week after French cinemas reopened, blaming crisis management overseas for the missing movies on French marquees. Polls during the lockdown showed that French moviegoers were eager to return to the so-called salles obscurs, the darkened halls of cinema and their plush red velvet seats. “But there is a slight discrepancy between fancying going to the cinema and wanting to see a film,” writer Jean-Michel Frodon explained back then.

European theatre operators have called on US studios to forgo the usual practice of simultaneous US and worldwide releases. Cinemas on the continent, they note, are open for business after all and hungry for films. But their appeal has gone unheard so far. For those pining for a US blockbuster at long last, it has been a bleak week. Christopher Nolan’s hotly anticipated “Tenet”, previously postponed twice from July to August 12, was delayed indefinitely. Late on Thursday, Disney announced a flurry of delays. Initially slated for March and already postponed twice, the studio’s much-awaited “Mulan” was also delayed indefinitely. “It’s become clear that nothing can be set in stone when it comes to how we release films during this global health crisis,” a Disney representative explained upon announcing the new delay.

After all, cinemas have yet to reopen in New York despite the state’s progress in handling the pandemic and they remain closed in California, which this week became the state with the highest coronavirus case tally, recording 415,000 since the crisis began. China, the world’s second largest movie market, only began re-opening cinemas this week, with restrictions, after six-month nationwide closures. All of which means studios are loath to part with a $200-million blockbuster like “Tenet”.

While it is far from business as usual for cinemas in France, some festivals are now powering ahead. After the disappointment of the Cannes Film Festival’s cancellation in May, another event further along on the Côte d’Azur is billing itself as the first in-person, post-Covid film fest. Largely a showcase for documentaries, the Marseille International Film Festival (FID) opened Wednesday in France’s second-largest city. The four-day festival (shortened from the usual six) will feature some 46 world premieres. Introducing the 2020 programme, organisers said they were “convinced that a film is a living organism, as fragile as it is powerful”. “Vive le cinéma vivant,” they declared – or long live living cinema.https://www.youtube.com/embed/frvkQdmrpdg?feature=oembed

Meanwhile in the French capital, the Paris Plages urban beach festival kicked off with a picturesque floating screening of 2018 French comedy “Le Grand Bain” (“Sink or Swim”) on the Bassin de la Villette, in northeastern Paris. Spectators manned a flotilla of 38 electric boats deployed across the basin in front of a giant screen, while others watched from lounge chairs on the quayside. Nearby, the annual open-air film festival kicked off Wednesday in the park at La Villette, with an agenda that includes classic crowd-pleasers such as “Thelma and Louise” and “The Lord of the Rings” on the agenda. That festival lasts until August 23.https://www.youtube.com/embed/x09d5yqDPro?feature=oembed

On Tuesday, the Deauville International Film Festival released the selection for its 46th annual edition. Its 14-film competition, featuring no fewer than eight women directors, is slated to go ahead on the Normandy seaside from September 4 through 13.

Further afield, in Italy, the 77th edition of the Venice International Film Festival is scheduled for September 2 to 12. The first major global film festival since the pandemic began, la Mostra will honour British actress Tilda Swinton and Hong Kong filmmaker Ann Hui with lifetime achievement awards. Screenings are due to take place inside traditional venues as well as outdoors. Organisers are set to announce its selection of some 50 films next Tuesday.

Perhaps the promise of a little silver-screen glitter on the horizon will entice an extra cinephile or two into those red velvet seats.