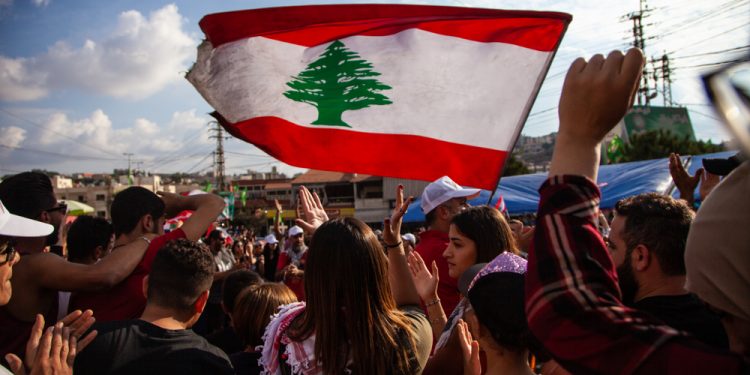 Nabatieh, South Government / Lebanon - 10 20 2019: Lebanese Protesters rising Lebanon Flag in the Sky at the Revolution against the Government

Brussels (Brussels Morning) France and the UN announced a relief fund for Lebanon at the virtual international aid conference on Wednesday, DW reports.

French President Emmanuel Macron and UN Secretary-General António Guterres pointed out that the fund, to be administered by the UN, the World Bank and the EU, would provide medical aid and food as well as pay for the rebuilding of the Port of Beirut. Guterres said the fund would help Lebanon get past the emergency phase and set the country on a path towards recovery.

Participants in the virtual conference called on Lebanon’s political elite to overcome the political deadlock and form a government, stressing that international monetary support depends on it. Lebanon has been struggling to form a new cabinet since the government stepped down in the wake of the 4 August explosion in the Port of Beirut. The country had been experiencing economic problems and political instability before that.

Speaking at the virtual conference, Macron made it clear that relief fund aid would go directly to the people of Lebanon while reiterating that long-term international aid would not be released until Lebanon forms a credible government. He urged Lebanese politicians to form a government as soon as possible and draw up a reform plan.

Germany’s Minister of Foreign Affairs, Heiko, Maas was critical of Lebanese politicians, saying they should fulfil their duties and earn back the trust of the people. Maas said it was shocking that four months had passed since the port explosion without any progress on formation of the government.

He warned that the humanitarian situation in the country is deteriorating and stated anew that the long-term international aid needed for reconstruction and development depends on Lebanese leaders.

International Monetary Fund (IMF) Managing Director Kristalina Georgieva pointed out the need for Lebanon to draw up a coherent fiscal framework and as well as to rehabilitate its banking sector. The IMF’s efforts to assist Lebanon with reforms implementation would remain on hold until the country forms a government, she added.

On Tuesday, the World Bank observed that Lebanon is facing a prolonged recession because political elites are refusing to implement reforms.