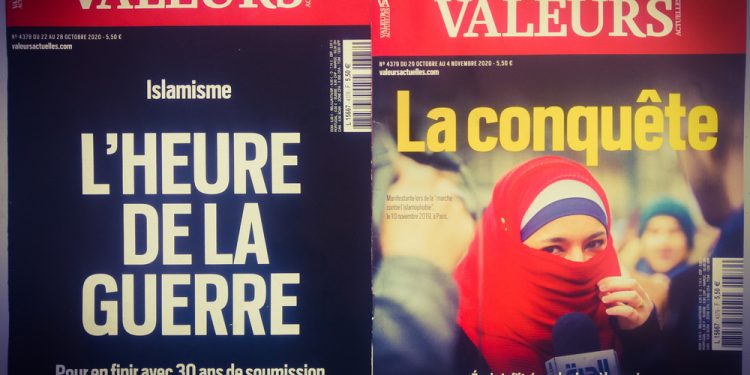 Nice, France - Oct. 29, 2020 - Front pages about Islam of the conservative newspaper Valeurs Actuelles, while France is hit by a wave of terror knife attacks and beheadings amid the jihadist threat

Paris (Brussels Morning) Emmanuel Macron secured on Wednesday the government’s backing for a new bill aimed to “reinforce the respect of the republican principles”.

The proposition did not specifically mention Islamism, but its context indicates that it will include measures to tackle Islamic radicalisation and reinforce the principle of ‘laicite’, or secularism, and civil liberties.

The government is introducing the legislation in the wake of security concerns after the recent terrorist attacks in Paris and Nice. The move also comes, however, as the secular state has faced rebuke for stigmatising the Muslim community in France – Europe’s largest.

Scheduled to be introduced for discussion in parliament in early January, more heated political, academic and social debates are likely.

The right-wing in France has put pressure on Macron throughout his tenure to clarify his positions vis-a-vis radicalism and laicite. He had previously presented an outline for the bill tackling “sectarianism” in February at Mulhouse, but the COVID-19 pandemic had caused delays bringing it forward.

More recently, the 42-year-old renewed his commitment to the bill by replacing the term “sectarianism” with “Islamist separatism”, only weeks before the beheading of college professor Samuel Paty and the Nice cathedral attack.

The bill was reviewed again ahead of the bill’s 9 December presentation, dropping contentious terms and mentioning the “respect of republican values”. The choice of terminology is proof of the issue’s sensitivity, according to a Liberation editorial.

Containing more than 50 articles and prepared by the ministers of interior and citizenship affairs, the bill aims to provide a rigorous framework that covers neutrality of public services, control over associations, compulsory schooling from the age of three and financing of religious institutions.

Home-schooling or schools that do not follow the national curriculum will face scrutiny, while religious organisations will need to be more transparent, especially regarding foreign financing, France 24 reported.

Mosques that promote extremist discourse will be shut, like Pantin mosque in the Paris suburbs and the BarakaCity association. Online hatred and incitement to violence will also be vigorously monitored.

It is probably the last major bill to be presented during Macron’s five-year mandate, as Liberation reports, but it has already proven to be a diplomatic and political minefield for the fifth republic’s eighth president, viewed as one that stigmatises the Muslim community it purportedly aims to protect.

The government is at pains to clarify that the bill won’t lead to the stigmatisation of Muslim citizens.

“This is not an action against a religion, it is an action against people who have a misguided conception of it and who have separatist behavior”, is a common soundbite from Macron’s entourage who are mindful of international criticism and measures against France, including the recent boycott and polemic initiated by Turkish President Tayyip Erdogan.

Defending the laws of the republic

Defenders of this rhetoric, however, maintain it aims to protect young people in impoverished areas from practices seen as “deviating” from the republican values of coexistence and to minimise the risk of their exposure to radical and violent discourse.

In an interview with LeMonde, Prime Minister Jean Castex said: “The enemy of the Republic is a political ideology called radical Islamism, which aims to divide the French among themselves” while adding that the law was aimed at “freeing” Muslims from the perils of radicalisation.

Opposing views of how far the state should go in asserting the principle of secularism are at the core of the issue.

While right-wing parties consider measures should be far stricter, the left criticizes the executive for hiding its Islamophobia behind core French values.

On the other hand, the left is accused of being too lax towards the Islamist discourse, being described by the pejorative but now almost mainstream term “Islamo-gauchisme” or “Islamo-leftism”.

The timing of this bill shows the importance given to it by the president. On 9 December 1905, and in the shadow of the Dreyfus affair, a law was promulgated to protect the right to believe or not believe and to be equal before the law.

The choice of the date means the government wants to avoid misunderstanding and further controversy across the political and social spectrum, already heavily polarised by the issue.

“There is nothing Islamophobic in this text, it is a republican initiative respecting the right to believe or not to believe”, maintained Jean Castex.

What is laicite and how is it related to Islam in France?

The liberty of conscience was promulgated in the 1905 law and in the constitution in 1946, and reaffirmed through the French revolution.

The principle of laicite, passed at the time by rapporteur Aristide Briand, stipulates in its first two articles the freedom of conscience and the liberty to exercise one’s creed without fear of repression or discrimination, as well as the neutrality of the state.

Commonly considered as the law separating church and state, it aimed to protect any religious community before the state, whether recognised or not. It established the society’s emancipation from the dominant Catholic church and from its monopoly to “form the public conscience”, according to historian Patrick Weil.

The law later included the Muslim creed as the main faith from among the French colonies. By the end of the 20th century, the main question centered around the freedom of exercising someone’s creed, i.e., to bear symbols of one’s faith, such as the veil or the kippah.

The Muslim veil question – and later on of the burkini – has become synonymous with the debates from previous decades.

The complex discussion of the French laicite and freedom of expression has now landed on the creation of caricatures and the right to blasphemy, or to be able to depict the Prophet Muhammad, a red line for the Muslim faith.

The Charlie Hebdo trial – which took place for blasphemy after it published the cartoons of the Prophet Muhammad in 2007 – returned clear rulings for France: while you cannot insult the followers of a religion, insulting its religion, figures and symbols are fair game.