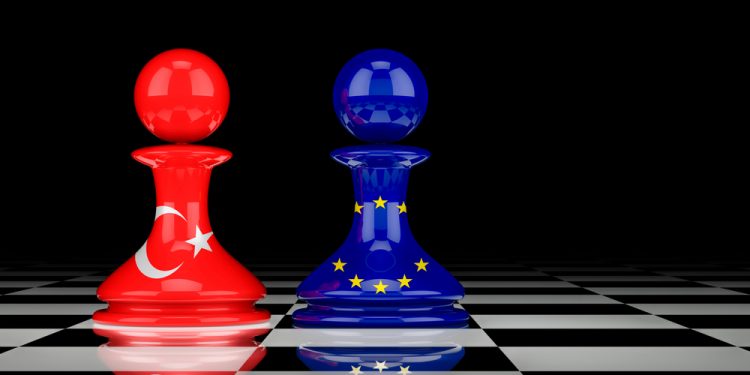 The EU and Turkey relations concept.

Brussels (Brussels Morning) France wants the EU to follow through on last month’s threat to impose sanctions against Turkey for hydrocarbon exploration in disputed waters, according to unnamed officials and diplomats, Reuters reported Thursday.

The sources note that Greece and Cyprus support France’s position, but that the French need to gain the support of other EU member states to push the plan through.

Paris pointed out that Ankara has ignored the EU’s warning of 1 October to stop its controversial explorations in disputed waters of the Eastern Mediterranean or else face sanctions. France’s Minister of Europe and Foreign Affairs Jean-Yves Le Drian said earlier this week that Turkey must choose between confrontation and collaboration.

France is also at loggerheads with Turkey over the conflict in Nagorno-Karabakh, with Paris accusing Ankara of fanning the flames, an accusation Turkey flatly rejects. The EU Parliament is expected to join the push for sanctions on Thursday, after MEPs condemned Turkish President Recep Erdoğan’s move earlier this month in Northern Cyprus, a de facto state recognised only by Turkey.

Turkey’s Ministry of Foreign Affairs criticised the bloc for raising the issue of sanctions, claiming that it was not helpful. According to one unnamed senior EU diplomat, there is a general consensus for imposing sanctions against Turkey, yet another, also nameless, points out that Turkey is an important partner in many areas, and that therefore it is premature to say whether they will be imposed.

Erdoğan’s call for a boycott of French goods at the end October further strained relations with the bloc, with Austria calling for an end to Turkey’s EU candidacy. Relations took an additional hit earlier this week when Germany intercepted a Turkish vessel in the Mediterranean.

Turkey’s Minister of Foreign Affairs Mevlüt Çavuşoğlu described the incident as an act of piracy and summoned EU, German and Italian envoys, an action Berlin criticised as unjustified. An unnamed French official expressed the belief that Erdoğan “went too far with the Germans”. The same official noted that they had criticised Turkey’s continued exploration in disputed waters in the Eastern Mediterranean.

Germany had initially tried mediating between Greece and Turkey, but Berlin was angered last month when Turkey resumed its explorations.