France joins Japan and US for Pacific military drills 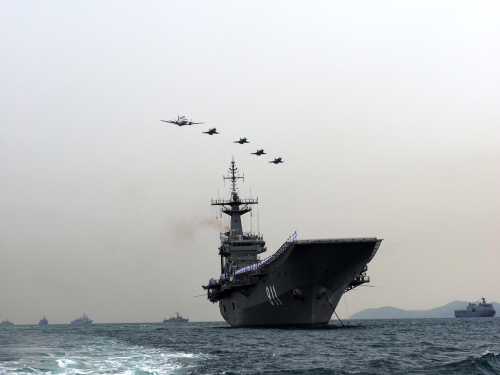 Brussels (Brussels Morning) France joined the US and Japan for their first-ever joint military exercise in southwestern Japan, expanding the alliance of Western democracies in the Pacific seeking to face down growing Chinese assertiveness in the region, RFI reported.

The exercise will consist of amphibious operations, landing on a simulated battlefield and coordinating fire support and reconnaissance efforts. US Marine Corps Osprey aircraft will transport French infantry forces from the Tonnerre, while Japanese helicopters will transport SDF forces with embedded Marines in a simulated multilateral raid on an urban objective.

Announcing the joint exercise, last month, French Rear Admiral Jean-Mathieu Rey stated that the French presence in the drills is intended to “ensure a regular presence” of French warcraft in the Indo-Pacific region, and to “strengthen regional partnerships”.

The exercise is the latest in a line of military operations conducted in the Indo-Pacific region, organised mostly in response to the increasingly aggressive behaviour of Chinese vessels and forces in the South China Sea, where, despite a 2016 Permanent Arbitration Court ruling that says otherwise, China continues to lay claim to numerous islands.

Using its “maritime militia”, a fleet of mocked-up fishing vessels believed by Western intelligence agencies to be an informal part of the Chinese Navy, armed and trained for conflict, China has been swarming select reefs in the sprawling Spratly Islands region, in effect disputing territorial claims of the Philippines and other nations in the region.

France is the latest Western democracy to join in an expanding informal alliance that aims to blunt China’s assertiveness in the region, by bringing significant military resources to the theatre. Linked to the region through its former colonies, France currently deploys some 7,000 defence personnel, 15 warships and 38 aircraft in the Indo-Pacific area.