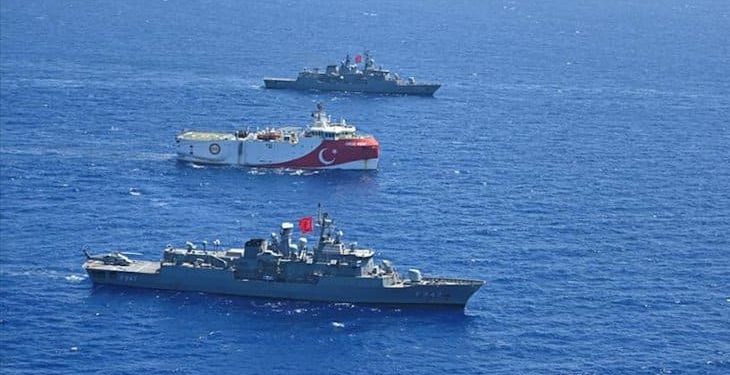 Brussels (Brussels Morning) On Thursday, France and Germany accused Turkey of provoking the EU with its activities in the Eastern Mediterranean, giving Ankara one week to explain itself, Reuters reports. Turkey has resumed oil and gas exploration in disputed waters off Greek islands despite calls to end its unilateral actions and resume talks.

Turkey deployed the Oruç Reis seismic survey vessel to the Eastern Mediterranean earlier this year and withdrew it last month before the EU summit where sanctions against Turkey were discussed. Turkey redeployed the vessel on Monday, with the EU announcing it would review the possibility of imposing sanctions at the summit slated for December.

France’s Minister of Europe and Foreign Affairs Jean-Yves Le Drian asserted that Turkey is clearly bent on provocation and that this is unacceptable. The ball is in Turkey’s court, he said, but the EU is prepared to intervene if the Ankara does not return to the negotiating table. Le Drian also singled out Turkey for the harm it was doing as the sole country not calling for a ceasefire in the Nagorno-Karabakh conflict.

Germany’s Minister of Foreign Affairs Heiko Maas described Turkey’s decision to redeploy the Oruç Reis as inexcusable. He indicated that the EU is prepared to wait a week for Ankara’s response before it decides how to proceed. Hoped for talks had been scrapped twice, he said, and it remained unclear as to when they might resume.

Speaking after the meeting with representatives of Germany and Poland, Le Drian warned that Ankara could face EU sanctions unless it shows respect for the territorial integrity of EU member states Cyprus and Greece, AP reported Thursday. Turkey and Greece have accused each other of provocations throughout the week.

Greece accused Turkey of refusing an overflight permit to the aircraft carrying the Greek Minister of Foreign Affairs Nikos Dendias back from his visit to Iraq. The Turkish Ministry of Foreign Affairs pointed out that the aircraft was different than the one the Minister flew out on, and that the new light plan required for the return leg had not been filed by the Iraqi authorities until after the Greek aircraft reached Turkish airspace. This resulted in a delayed entry of about 20 minutes, according to the Turkish Ministry.