by Stella Athanasoulia
in Features, Our pick 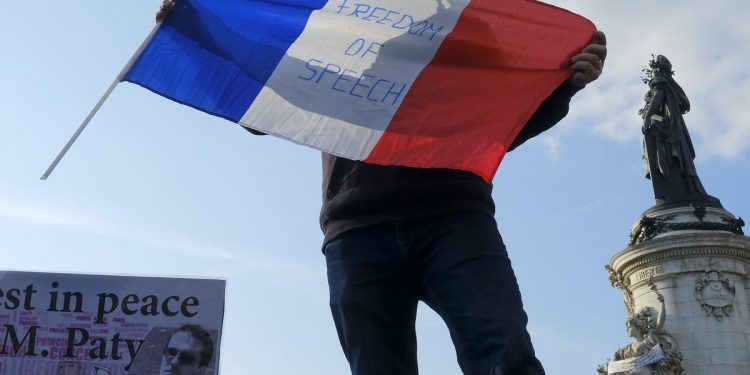 Paris (Brussels Morning) With healthcare facilities struggling under the pressure of caring for corona patients, the French government and President Emmanuel Macron under attack for their handling of the pandemic and their response to the scourge of Islamist attacks, France is facing an unprecedented situation arising from simultaneous crises.

The Islamist attacks pose a threat to national security and the political landscape has suddenly become treacherous to navigate for Macrlon, once so popular but now increasingly vilified abroad as angry protests in the Muslim world continue to challenge France diplomatically, commercially and at street level. Following the terrorist attacks, the French national security alert remains at maximum level as the row over whether satire in the name of freedom of expression should be allowed to mock the Prophet Muhammad gathers momentum and spreads as typified by the worsening diplomatic row between France and Turkey. Meanwhile, as the country entered a second full lockdown on 30 October, the public is divided over the impact of the new lockdown measures on small businesses across the territory, as well as over questions of Islamophobia and the French Muslim community.

A series of terrorist attacks have left the country distraught in recent days, while the protests and calls to boycotting France and French goods abroad have unleashed a sense of tension nationwide and put the authorities on maximum alert. The attacks were mainly linked to the row over cartoons of Prophet Muhammad published and re-published by Charlie Hebdo, the satirical magazine that was the target of deadly terrorist attacks in January 2015. Considered highly insulting to the Muslim culture which strictly prohibits any depiction of Allah or the Prophet Muhammad, the issue has led to a polarising debate over questions relating to Islam in France and have raised the threat level of potential retaliatory terrorist attacks as extremist groups linked to Al-Qaeda or the Islamic State have called for further attacks on French targets.

According to analysis by France24, the threat consists more of individual actions against targets like churches rather than coordinated attacks. The French authorities are alarmed by a rise in online hate crime and intelligence services have placed the country on a state of maximum alert, with social media monitoring intensified in order to pre-empt any similar targeting. The authorities are also closely monitoring a number of associations and NGOs suspected of maintaining links with Islamist radicals. Last week, the NGO BarakaCity was dissolved by the Council of Ministers and dozens more are under close surveillance.

At the same time, Emmanuel Macron stood up for the French values of freedom of expression, insisting that caricatures form a part of the core of these liberties. He added that Islam today finds itself in a “state of crisis”. While his words were intended to safeguard the values and unity of the French Republic, they also served to fuel a long-standing debate about the principle of a secular society and the country’s relation to its Muslim population.

The President’s comments reverberated across the Muslim world, with protests against France and calls for boycotting French products echoing throughout many Muslim capitals, clearly not the outcome Macron had intended his remarks to achieve, according to the Guardian. Turkey has taken a leading stance in condemning Macron’s posture, mainly through firebrand comments by President Recep Tayyip Erdogan, whose senior cabinet ministers have expressed their anger in similar harshly worded statements. This face-off only reflects a wider geopolitical showdown between the two countries, mainly regarding the Eastern Mediterranean and in the conflicts in Syria and Libya, as Middle East Eye points out.  France’s Minister of the Interior Gerald Darmanin announced on Monday that the organisation “Grey Wolves”, an ultra-nationalist Turkish movement that has violently targeted Armenians in the country in recent weeks, will be disbarred.

Similar messages have been conveyed by the Pakistani Prime Minister, Imran Khan, while a social media message by former Malaysian Prime Minister Mahathir Mohamad calling on Muslims to “kill millions of French” was removed from both Twitter and Facebook after the uproar it caused.

Last week, Turkey’s President Erdogan was highly critical about the French publication of cartoons depicting the Prophet Muhammad, even going so far as to question President Macron’s sanity. A mini diplomatic crisis has since unfolded with France’s Ministry of Foreign Affairs recalling its ambassador from Ankara and accusing Turkey of exploiting the beheading of professor Samuel Paty and launching a slanderous and hateful campaign against France. Turkey expressed condolences over the church attack in Nice in which three people died, while France offered to send help following the deadly earthquake that struck the Turkish coast and the Greek islands last week. Defence Minister Jean-Yves Le Drian announced at the weekend that the French ambassador was to return to his post.

In an interview with the Al-Jazeera network last Saturday, Macron adopted a more conciliatory approach, saying that while he was aware that cartoons might shock the Muslim population, France would never renounce its laws that permit such publications, and that however much some might object to them, this did not justify any killing or violence.

Macron accused President Erdogan of having a bellicose attitude in Syria, Libya, in the Eastern Mediterranean and against NATO allies. He reiterated that it was France’s wish to see tensions ease but that the Turkey’s President must show respect for France and for the EU and its values and stop his lies and insults.

While the inflammatory rhetoric between Paris and Ankara has cooled down somewhat, protests continue across the Muslim states, raising fears of further attacks either on French soil or on French citizens residing in these countries.

Le Figaro reported on 2 November that more than 50,000 people demonstrated against France and called for a boycott of French products in the Bangladeshi capital, Dhaka. The country’s biggest Islamist group Hefazat-e-Islam called for the protest and urged the government to immediately sever its ties with France. “We are giving an ultimatum to the government to end diplomatic ties with France within 24 hours”, Reuters reports the group’s leader Junayed Babunagari as having said.

Divisions within the French society

The demonstrations in Muslim and Arab countries saw the public debate in France intensify over the question of Islamophobia in recent weeks with intellectuals, politicians and academics engaged in heated discussions. Some such as right-wing Les Republicains and Marine LePen’s Rassemblement National defended a security-oriented strategy, while others on the left wing favoured a more comprehensive approach, earning the pejorative misnomer “Islamo-leftism” .

The Minister of National Education Jean-Michel Blanquer added fuel to the fire, maintaining that the academic community is essentially part of the problem of extremism. This prompted an angry reaction by the Association of Presidents of Universities. Causing a further schism among the academics, a number of university professors and researchers recently presented a common front in Le Monde by their support of Blanquer through a call for more consolidated action to fight against ideologies that could result in further radicalisation.

In a separate message of solidarity, a number of French Muslim intellectuals, including the rector of the Grand Mosque of Paris, have called for calm and for reason, maintaining it is crucial that unity and harmony prevail at this challenging time. While recognising that cartoons may shock and offend those of the Muslim faith, they were at pains to underline the principles of the Republic, adding that by “recognising no cult, it protects them all” and that “boycotting France means ignoring the reality of its ideals”.

The Nice attack took place on the day a new national lockdown was due to come into force as France struggles to contain the second wave of Covid-19, which threatens to be a lot more severe than the first. The lockdown is set to last until 2 December but is likely to be extended beyond, according to several French media outlets. The Scientific Council responsible for advising the government on the evolution of the pandemic has cast doubt over the possibility of limiting the daily cases to 5,000 from about 45,000, where the number currently stands, Le Monde reported. Looking to the end of the year festivities, Health Minister Olivier Veran told the Journal du Dimanche that the Christmas season “will not be normal this year” and that respecting the lockdown is key.

Criticism about the government’s management of the crisis is increasing. Consumers have taken to social media to protest against the discrepancies of the new measures as they apply to big commercial chains and small and medium-sized businesses. According to the restrictions imposed in France since 30 October, all “non-essential” services and retail outlets should shut down. However, homeware and electronics chain Fnac-Darty announced its shops would remain open throughout the lockdown, prompting widespread criticism of unfair competition as small businesses such as local bookshops are fighting for their survival. In response, the government is to publish a decree defining what constitutes “non-essential goods”, while the big commercial chains will have to close their book sections.