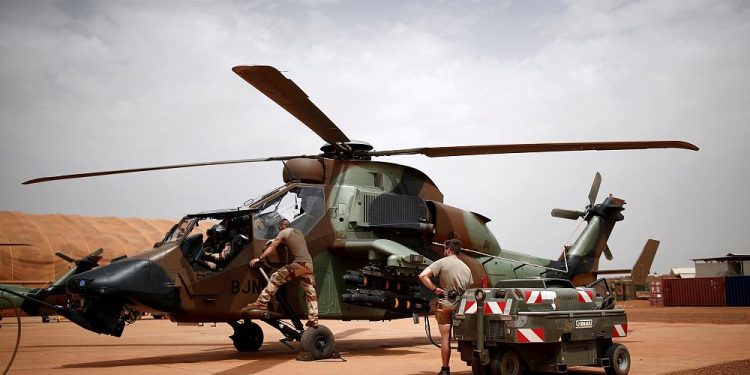 Brussels (Brussels Morning) French forces reported killing more than 50 jihadists and capturing four in an operation in Mali last week, DW reports. France’s Minister of the Armed Forces Florence Parly claimed the action, carried out on October 30, was a major blow to Al-Qaeda.

After meeting with representatives of Mali’s transitional government in the capital Bamako, Parly noted that the operation had been carried out near the borders of Niger and Burkina Faso. She pointed out that it was launched after surveillance detected a large caravan in the three borders area, as a result of which, two fighters and a drone were dispatched to launch missiles.

According to military spokesman Colonel Frédéric Barbry, the group had been preparing to assault an army position in the region. He noted that arms and material were confiscated.

Meanwhile, anti-French protests continued in the Muslim world, over the ongoing controversy about publication in France of controversial cartoons depicting the prophet. Some 50,000 Islamists protested in Bangladesh while about 2,000 marched on the French Embassy in Jakarta, Indonesia, RFI reported Monday.

Iran’s Chief Justice of Iran Ebrahim Raisi criticised French President Emmanuel Macron for making anti-Islamic remarks, claiming this was worse than an attack on a church. Iranian Minister of Foreign Affairs Mohammad Javad Zarif, pointing out that Muslims are the primary victims of the cult of hatred, said he believed that freedom of expression fuels extremism.

Among the Muslim majority countries now calling for a boycott of French products are Algeria, Kuwait, Morocco, Palestine, Qatar and Sudan.

In Jakarta, Islamist protesters asserted that Macron was the real terrorist and demanded that he apologise to Muslims, Reuters reported Monday.

On Monday, French interior Minister Gérald Darmanin announced plans to place a ban on the Grey Wolves, the Turkish ultra-nationalist group, RFI reported. The defacing of the Armenian Genocide memorial centre came as tensions rose between Turkish and Armenian communities in France over the conflict in Nagorno-Karabakh Darmanin said the memorial centre located in the town of Décines-Charpieu had been defaced over the weekend with graffiti, some of which was tagged with the name of the Grey Wolves. He denounced the group for its aggressiveness and said it deserved to be dissolved.

France has announced measures to ban Islamist groups and to cut off their funding after last month’s jihadist attacks shook the country. French MP Yaël Braun-Pivet welcomed the proposed ban on the Grey Wolves, noting that violent groups have no place in France.