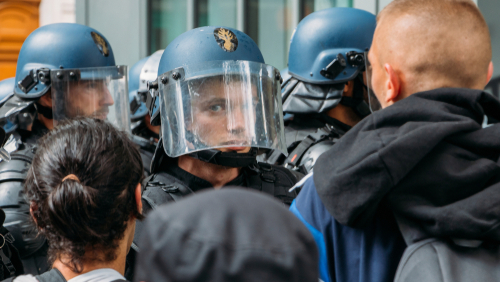 The organisation has become infamous in recent years for staging a number of operations aimed at blocking migrants from entering the country. The most recent incident occurred in January, with some 30 Generation Identity members blocking a mountain pass on the French-Spanish border, in what they described as a “surveillance operation to defend Europe”.

The group’s leader and two other members were sentenced to six months in prison after setting up a blockade in the French Alps and renting two helicopters in an effort to search for migrants attempting to enter France. Also, the group previously erected fences at border crossings.

Interior Minister Gérald Darmanin posted the decree proclaiming the group would be banned on his Twitter account, noting the decision came after consulting with President Emmanuel Macron. He said due account was taken of the group’s structure and paramilitary organisation, which indicated that Generation Identity could be regarded as “having the character of a private militia”.

Darmanin also noted in the decree that Generation Identity had links to ultra-right radical groups that provided the organisation with logistical support. It was significant too, he added, that it had  received donations from Brenton Tarrant, the right-wing terrorist responsible for the 2019 mosque shootings in New Zealand’s Christchurch.

The decree declaring the Lyon-based organisation to be illegal maintained both its actions and publications spread an ideology “inciting hatred, violence and discrimination of individuals, based on their origin, their race or their religion.”