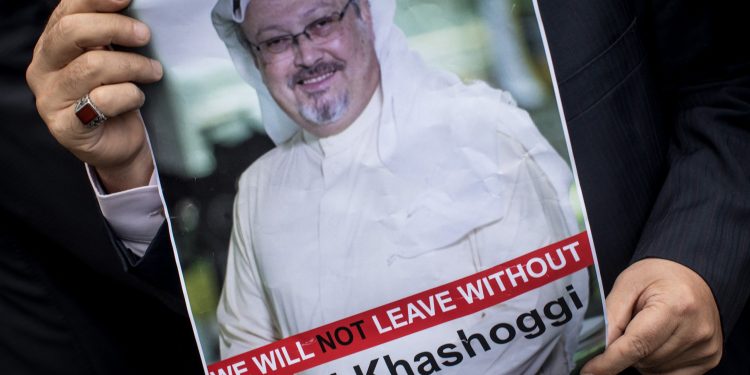 ISTANBUL, TURKEY - OCTOBER 08: A man holds a poster of Saudi journalist Jamal Khashoggi during a protest organized by members of the Turkish-Arabic Media Association at the entrance to Saudi Arabia's consulate on October 8, 2018 in Istanbul, Turkey. Fears are growing over the fate of missing journalist Jamal Khashoggi after Turkish officials said they believe he was murdered inside the Saudi consulate. Saudi consulate officials have said that missing writer and Saudi critic Jamal Khashoggi went missing after leaving the consulate, however the statement directly contradicts other sources including Turkish officials. Jamal Khashoggi a Saudi writer critical of the Kingdom and a contributor to the Washington Post was living in self-imposed exile in the U.S. (Photo by Chris McGrath/Getty Images)

Brussels (Brussels Morning) French police apprehended a suspect on Tuesday believed to be a member of a Saudi death squad that executed regime dissident and Washington Post columnist Jamal Khashoggi at the Saudi consulate in Istanbul in 2018.

The man, named Khaled Aedh Al-Otaibi, was detained by French authorities as he was attempting to leave France. He was preparing to board a plane from Paris to Ryadh, when he was arrested on the basis of an international arrest warrant issued by Turkey in the wake of the Khashoggi murder.

The Saudi Arabian embassy in Paris claims that the incident is a case of mistaken identity, and that the arrested Al-Otaibi is not the same person as the former member of the Saudi Royal Guard identified by an UN-commissioned report as one of the participants in the Khashoggi murder.

The Saudi Embassy maintained that it expected his immediate release, given that the “arrested person has nothing to do with the case in question.” According to the official Ryadh position, all of the men who participated in the dissident’s murder have been tried, convicted and jailed.

Saudi Arabia announced last year that eight people had been sentenced to jail time ranging from seven-to-20 years for their role in the killing, However, none of the defendants were named by the authorities, leaving critics to speculate that the trial was a sham designed to feign concern over the case and mislead the international community.

Former UN investigator Agnes Callamard, now head of Amnesty International, identified Al-Otaibi as one of the members of a Saudi black ops team present at the Istanbul consulate at the time of Khashoggi’s murder. According to the UN report, Khashoggi was suffocated, and his body dismembered before being disposed of in several locations in Istanbul.

Callamard stressed that more confirmation will be necessary to prove that the man currently detained in Paris is the same person she identified in the report.