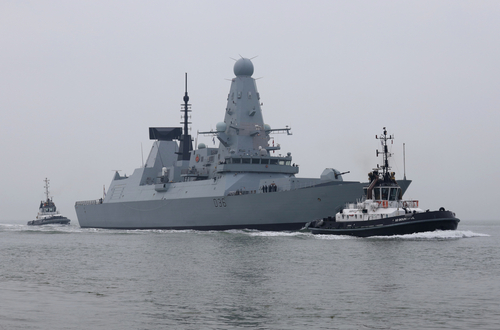 Brussels (Brussels Morning) France has dispatched two naval vessels to patrol off the British Channel Island of Jersey on Thursday, in an escalating response to London’s deployment of two Royal Navy vessels as the two countries remain locked in a post-Brexit fishing rights row, Reuters reports.

The French government was angered by Jersey’s issuance of new fishing permits. Paris maintains that the permits impose unfair restrictions on French trawlers’ access to the island’s fishing waters, one example being that they limit the time the French trawlers are allowed to spend in its waters.

Some 25 French fishing vessels staged a protest against the restrictive licenses by assembling in group formation next to the island on Thursday. They stressed that the protest did not constitute a “blockade,” making it clear that they were not attempting to interfere with other traffic coming and going from the island’s port.

France’s Seas Minister Annick Girardin previously said he was “disgusted” by the limits imposed in the licenses, and had threatened retaliatory measures. “Regarding Jersey, I remind you of the delivery of electricity along underwater cables”, Girardin said. “Even if it would be regrettable if we had to do it, we’ll do it if we have to”. The British island relies on France for 95% of its electricity.

British Prime Minister Boris Johnson stressed “the urgent need for a de-escalation in tension”, according to his spokesman, and then proceeded to send two Offshore Patrol Vessels “to monitor the situation”, describing it as “a precautionary measure”.

The French Navy responded on Thursday by announcing two French patrol vessels had been dispatched on the order of the French civil authorities. The announcement did not elaborate on what the vessels’ precise task will be.

According to an official from the French presidential administration, the deployment of the vessels “speaks to our concern, and frustration, and is an appeal, which we will also express, for the correct application of agreements sealed when Britain left the EU”.