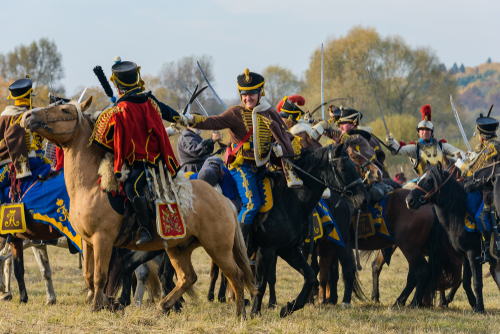 Brussels (Brussels Morning) In a rare display of unity, France and Russia laid the remains of Napoleonic war casualties to rest in the town of Vyazma, marking the 200 years since the death of the French military and political leader, RFI reported.

Officials and descendants of Russian and French military leaders gathered at the Vyazma cemetery to re-bury the remains of 126 people killed during Napoleon’s retreat from Moscow, one of the bloodiest battles of the French leader’s Russian campaign.

The remains of the casualties were discovered in 2019 in a mass grave by French and Russian archaeologists. The victims numbered 120 soldiers, three women and three teenagers, all being  laid to rest in Vyazma on Saturday.

The women were believed to have been “vivandieres”, tasked with providing first aid and keeping canteens in the French army, while the three teenagers were most likely serving as drummers.

“Direct descendants of the main players in the conflict are meeting here together in a sign of reconciliation to commemorate the Russian and French soldiers that their ancestors commanded more than 200 years ago,” said Pierre Malinowski, who led the archaeological dig.

Among the attendants was the Prince Joachim Murat, a descendant of one of Napoleon’s most celebrated marshals, and Yulia Khitrovo, a descendant of Russian field marshal Mikhail Kutuzov. “As generations pass, death and time reconcile everyone,” Khitrovo said at the ceremony.

The Franco-Russian show of reconciliation comes against the backdrop of heightened tensions between Moscow and the EU, following the arrest of prominent Kremlin critic Alexei Navalny and the methodical crackdown on the ensuing opposition protests.