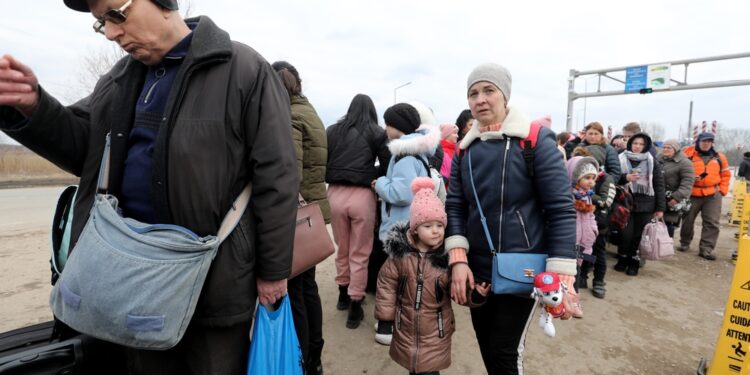 Some forty Brussels companies, ranging from project developers to hotels, want to make office or living space available to temporarily receive Ukrainian refugees. The Brussels Region aims to provide temporary shelter for 20,000 refugees and is therefore looking for 150,000 square metres of space.

Together with Pierre Verbeeren, government coordinator for Ukrainian refugees, Prime Minister Rudi Vervoort (PS) launched an appeal to various real estate players as reported by BRUZZ. The ordinary housing market cannot cope with the enormous wave of asylum seekers. That is why the government is looking elsewhere for shelters. In the meantime, various organisations are making additional locations available.

“In the first instance, we will check the new locations for safety and ensure that there is access to proper sanitary facilities,” says Verbeeren. Verbeeren does not want to say which companies or organisations provide their support. Hotels and youth hostels, among others, would make places available.

The deadline for applications was April 26. “We have already received about forty offers from various sectors. This means we are currently at a total of 40,000 m² of available space,” says Verbeeren.

From five thousand to ten thousand

The plan is to accommodate 5,000 asylum seekers by May 31. By the end of June, that number should have doubled to 10,000 people. “We will maintain that target. Of course that is a huge pressure on our shoulders, but we will get there step by step,” says Verbeeren.

Brussels will account for about 10 percent of the 200,000 asylum seekers expected in Belgium. The Region is working with the municipalities on a plan to distribute Ukrainians equally over the territory. 15 percent of the 20,000 Ukrainians have already found a place through private initiatives. According to Verbeeren, the Region still has to look for 10,000 places, the municipalities must provide 7,000 reception places.

Brussels not only offers shelter, it is also the intention to allow Ukrainian asylum seekers to participate in society. “Actiris has a service in Ukrainian. Their goal is to help the refugees find a job as quickly as possible,” says Verbeeren. In addition to children in primary and secondary education, it is also the intention to give students the opportunity to follow higher education classes in September.