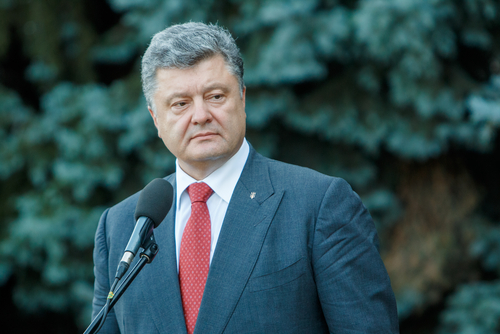 President of Ukraine Petro Poroshenko met with reporters during a visit to Odessa, 2015.07.08.

Brussels (Brussels Morning) Former Ukrainian president Petro Poroshenko returned to Kiev on Monday, where he is to face charges of treason raised against him on 20 December last year.

Poroshenko, a business tycoon, served as President of Ukraine between 2014 and 2019 when he lost his reelection bid to current president Volodymyr Zelensky. Soon after, he became the target of the country’s security apparatus.

Police raided both his party headquarters and a gym he owned with deputy party leader Ihor Kononenko. The State Investigation Bureau claimed recording devices were found inside the gym’s smoke detectors and security alarms, and that they contained secret recordings of gym clients, prominent politicians and businessmen among them.

In December 2021, Poroshenko was accused of state treason, aiding terrorist organisations, and financing terrorism, over allegedly organising the purchase of coal from rebel-held areas of Ukraine in partnership with pro-Russian politician Viktor Medvedchuk.

Poroshenko, who was in Poland at the time, announced on 15 January he would be returning to his country “to defend Ukraine from Russian aggression”, despite the ongoing case against him. He claimed the charges against him were “fabricated, politically motivated, and black PR” directed at political opponents of the incumbent president.

President Zelensky’s administration, on the other hand, insists prosecutors and judiciary are independent and accuses Poroshenko of believing he is above the law.

Tetiana Sapyan, the spokeswoman for the State Bureau of Investigations, claimed the former president on arrival at Kiev airport had “refused to receive procedural documents”, and had ignored “the legal requests of the investigator.” She said that persons accompanying him had “carried out physical resistance, which was recorded on video.”

Poroshenko has since been summoned to appear in court later today, although he was not apprehended and could ostensibly ignore the summons.