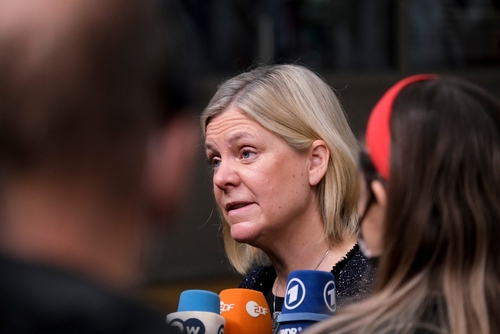 Sweden's Prime Minister Magdalena Andersson speaks to the press as she arrives to attend a European Union Summit with all 27 EU leaders in Brussels, Belgium, 16 December 2021.

Belgium (Brussels Morning Newspaper) The fate of Swedish Prime Minister Magdalena Andersson was hanging by a thread on Tuesday, as its paper-thin majority was set to be tested by a confidence vote prompted by the centre-right opposition. A key figure in the vote was independent lawmaker Amineh Kakabaveh, a former Kurdish peshmerga fighter.

Andersson’s government was plunged into crisis as the opposition centre-right bloc called for a vote of no confidence in Justice Minister Morgan Johansson over the rise in gang crime recorded in Sweden. Prior to the vote, PM Andersson announced that her Social Democrat minority government would resign if her minister was voted out.

With the opposition counting on 174 votes in the parliament – one less than needed for the no-confidence motion to pass – all eyes were turned towards Kakabaveh, who already rescued Andersson in November when the PM was forced to resign after just one day in office.

Kakabeveh reportedly sought assurances from the government that it would affirm Sweden “supports the Kurds” and that Stockholm would insist Kurds coming to Sweden are not terrorists.

Andersson promised Kakabeveh that Stockholm would deepen its cooperation with the Syrian Democratic Union Party (DUP), a Kurdish group opposing the rule of Syrian dictator Bashar al-Assad. The problem lies in the fact that Turkey considers the Syrian party to be a part of the PKK, which both Sweden and Turkey consider to be a terrorist organisation, though Swedes does not acknowledge its links with the DUP.

WIth Sweden and Finland applying for NATO membership, Turkey has initially vetoed their application saying that they harbour terrorists, even “in their parliaments” – referring, most likely, to ethnic Kurdish deputies such as Kakabaveh.

Before the vote on Tuesday, Kakabaveh said that she would refrain from voting – in effect denying the opposition the key vote needed to recall Johansson, and, indirectly, the Andersson cabinet.