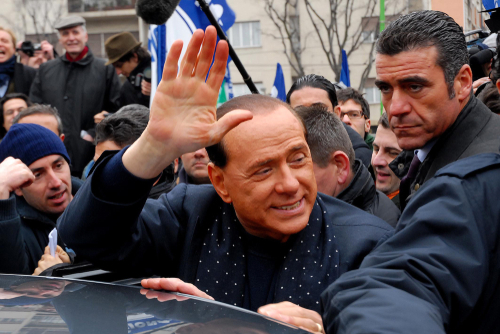 Italy - Milan February 28,2018 - Silvio Berlusconi during a rally of Forza Italia for the electoral campaign in the square

Belgium (Brussels Morning Newspaper) Former Italian Prime Minister Silvio Berlusconi was found not guilty of bribery by a Rome court, in a second not guilty verdict for the venerable politician and media mogul over allegations of bribery relating to a previous criminal trial.

The verdict came as a boost to Berlusconi, leader of centre-right Forza Italia (FI) party, which is currently backing the far-right government of Prime Minister Georgia Meloni. Berlusconi was reelected to the parliament at the most recent elections, after being barred from holding office as a consequence of a tax fraud verdict.

The bribery case Berlusconi was indicted for was related to a previous trial held in 2013, in which he was accused of paying for sex with a 17-year old Moroccan nightclub dancer. According to the prosecutors, Berlusconi paid Italian singer Mariano Apicella 157,000 euro to give false testimony in the underage prostitution case.

Apicella, a regular performer at former PM’s infamous “Bunga Bunga” parties, was also acquitted of both bribery and related perjury charges as the statute of limitations on his alleged crime has expired.

A court in Sienna acquitted Berlusconi last year of bribery charges involving another witness of the Bunga Bunga parties, but the prosecutors have appealed the ruling and the new trial date has yet to be scheduled.
Berlusconi is still facing bribery charges in Milan, where he is accused of bribing 24 witnesses in the underage Moroccan dancer case. Most of the witnesses were also guests at his Bunga Bunga parties. Berlusconi, who has pleaded not guilty in this case as well, could be sentenced to up to six years in prison should he be found guilty. A verdict in this case is not expected before early next year.