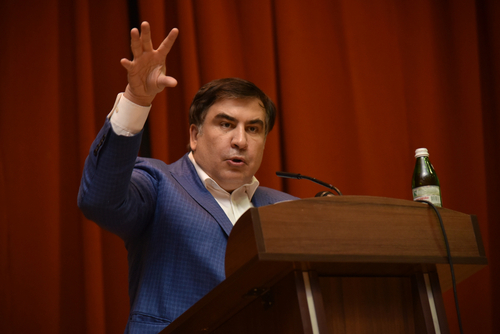 Brussels (Brussels Morning) Jailed former Georgian president Mikheil Saakashvili is reportedly in a critical condition and lacking adequate medical care, following weeks of being on hunger strike in protest against his Georgian imprisonment.

Saakashvili was arrested by Georgian authorities on 1 October this year after returning from Ukraine, where he fled to evade multiple criminal charges, which he decried as politically motivated.

Since being jailed, Saakashvili embarked on a hunger strike now lasting for 48 days. A council of medics assembled by the country’s ombudsperson warned on Wednesday that his current health status is critical. According to impartial medics, Saakasvhili’s condition is such that he is at imminent risk of fatal complications.

Georgia’s government, meanwhile, has refused to transfer him from prison hospital to a civilian clinic, ignoring the advice of the doctors. The ombudsperson’s medical council also stressed that the prison hospital cannot meet his medical needs.

According to an Amnesty International report released last week, Saakashvili was “denied dignity and adequate care” at the prison hospital. The report described his internment as an example of “selective justice” applied in a case of “apparent political revenge”.

Saakashvili’s arrest has exacerbated the already tense political situation in the country, following last year’s elections, which the opposition claims were fraudulent. His arrest led to some of the largest anti-government protests in a decade, with many opposition politicians joining in the hunger strike in solidarity with the former president.

Georgian Prime Minister Irakli Garibashvili sparked harsh criticism when, in reference to the hunger strike, he stated that “Saakashvili has the right to commit suicide”. The PM noted that the government had been forced to arrest him because “he refused to quit politics”.