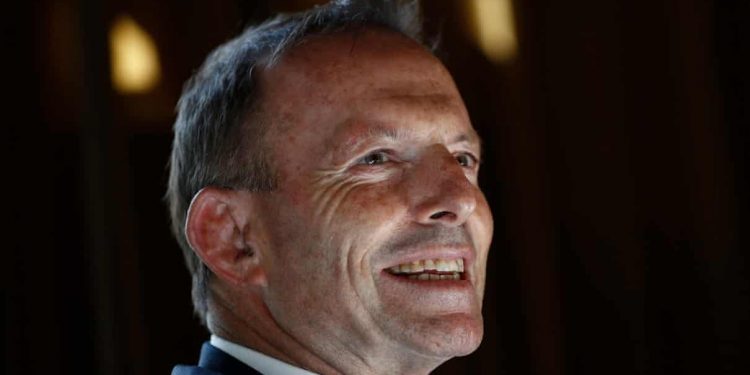 He has previously praised the “solidarity” of the English-speaking nations that share strong bonds with the UK. Now the former Australian prime minister, Tony Abbott, is tipped to be appointed to advise the UK – his birthplace – on how to seize trade opportunities post-Brexit.

The Guardian understands there’s been speculation in Australian government circles for some time that Abbott – a social conservative who was prime minister for nearly two years until he was toppled in a snap party vote in 2015 – was in line for a British trade advisory role of some form.

That talk intensified on Wednesday when the Sun reported that the “forthright Aussie” would become Britain’s “new trade deal supremo”.

While the Sun suggested that Abbott would be joint president of the UK Board of Trade, this could not immediately be confirmed, with the UK high commission in Canberra saying the reports were premature.

Bevan Shields, an Australian London-based journalist for the Nine newspapers, reported on Twitter that he had been informed the story was not accurate. Instead, Abbott was likely to join the board “in some sort of advisory capacity”.

The Board of Trade – which meets quarterly – brings together figures from business and politics, according to the UK government. Those figures “make up the advisers to the Board of Trade and represent the business voice from the whole of the UK”.

The board has previously been ridiculed because the international trade secretary was the only official member. The Department for International Trade noted that membership of the board of trade was “restricted to privy councillors” and others served as advisers.

Scott Morrison, the Australian prime minister, was asked about the reports of Abbott’s appointment on Wednesday and said only that it would be “a good hire”.

Abbott, who was ousted as prime minister by his colleague Malcolm Turnbull in 2015, was then turfed out of federal parliament last year when he lost his Sydney seat of Warringah in the federal election last year.

The London-born Abbott, who moved to Australia when he was two years old and later studied at Oxford University as a Rhodes Scholar in the 1980s, has previously been effusive about the shared bonds of English-speaking countries.

In his 2009 book Battlelines, Abbott wrote: “The bonds between the countries of the anglosphere arise from patterns of thinking originally shaped by Shakespeare and the King James Bible, constantly reinforced by reading each other’s books, watching the same movies and consuming the same international magazines.

“It’s a solidarity based on ideas in common and even mutually shared differences of opinion rather than on race, religion or economic self-interest.”

In early 2016, Abbott wrote a piece in the Times recommending British voters choose stay in the EU rather than vote for Brexit.

“Any British decision to withdraw from the European Union would have seismic consequences,” he wrote.

“There’s much to dislike about the EU but very little that would be improved if Britain left.”

It did not take long after the vote to leave, for Abbott to say he was “quietly thrilled” with the result and recant his former Brexit scepticism, becoming an enthusiastic supporter.

In 2019, Abbott was accused of lacking a “basic grasp of economics” after a piece in the Spectator called No deal? No problem, in which he wrote that “as a former prime minister of a country that has a perfectly satisfactory ‘no deal’ relationship with the EU, let me assure you: no deal would be no problem”, Abbott wrote.

“A no-deal relationship with the EU has not stopped Australia doing about US$70 billion worth of trade with the EU in goods and services.”

Economists said Abbott’s comparison fundamentally ignored how the EU common market worked as well as complex supply chains in manufacturing industries such as carmaking and aerospace.