Flu and Covid: winter could bring ‘double-barrel’ outbreak to US 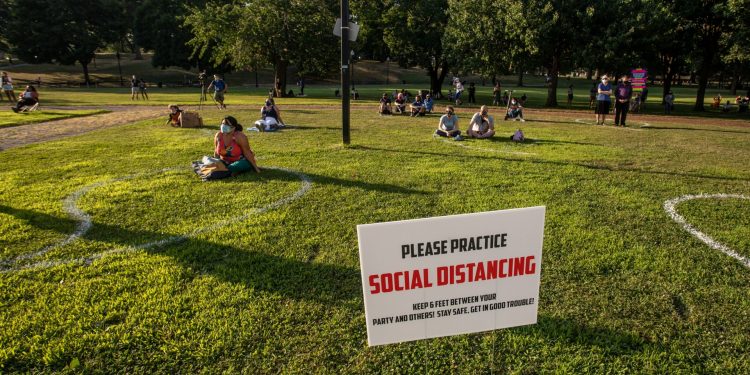 Public health experts, researchers and manufacturers warn the coming flu season could bring a “double-barrel” respiratory disease outbreak in the United States, just as fall and winter are expected to exacerbate spread of Covid-19.

At the same time, researchers said the strategies currently used to prevent Covid-19 transmission – namely, hand-washing, mask-wearing and social distancing – could also help lessen flu outbreaks, if Americans are willing to practice them.

“We will be faced with basically a double-barrel respiratory virus season, both influenza and Covid,” said Dr William Schaffner, medical director for the National Foundation for Infectious Diseases and a professor of medicine at the Vanderbilt University School of Medicine in Tennessee.

Flu season typically peaks between December and February in the northern hemisphere. It caused an estimated 61,000 deaths and 810,000 hospitalizations in 2019 in the US, according to the US Centers for Disease Control and Prevention (CDC).

By comparison, Covid-19 has killed more than 166,000 people in the US with months to go before the end of the year, according to the Johns Hopkins University Coronavirus Resource Center. The disease hospitalized an estimated 293,000 people just between March and May 2020, according to the healthcare consulting firm Avalere. Those deaths and infections also occurred despite huge efforts – such as shutting down large parts of the US economy – being put into action to slow the virus’s path.

While the flu’s seasonality is not clearly understood, the way it spreads is well documented. Flu is transmitted in much the same way Covid-19 spreads: coughs, sputters and sneezes in close proximity in closed spaces and in crowds. For those reasons, social distancing measures are effective against influenza as well as Covid-19 and were practiced during the deadly 1918 flu pandemic.

When community spread of Covid-19 began in the United States in March, widespread shutdowns shaved “four to six weeks” off the flu season in 2020, said Dr Richard Kennedy, co-director of the Mayo Clinic’s vaccine research lab.

That was “probably as a direct result of the social distancing and the mask-wearing and the shutdown,” said Kennedy. A similar phenomenon is taking place in the southern hemisphere, where winter flu season is now tapering off. Countries such as Chile have seen historically low influenza transmission.

“Will we see that same thing up here? The answer is, if we wear our masks and social distancing, yes. If we remain shut down, yes,” said Kennedy. “But I don’t know if Americans are going to do any or all of the above.”

“We’re seeing groups wanting to open the economy up regardless of the risks. Then we’re seeing people saying, ‘No, we want to shut down and we don’t care if the economy crashes,’” said Kennedy.

But unlike for Covid-19, the world has another tool to fight seasonal influenza: flu vaccines.

Each year, public health officials select up to four flu strains to include in the next year’s vaccine. The one-year lag is needed for manufacturing but is also what makes the vaccine so imperfect.

“Bad” flu years are often the result of drift or mismatch, when the strains selected for the seasonal vaccines fail to match those actually circulating. Because of drift, flu vaccines are generally between 10% and 60% effective, according to the CDC.

However, even when mismatch occurs researchers believe the vaccine still confers protection. People who are vaccinated are less likely to develop severe symptoms or be hospitalized, even when they are infected.

For that reason, US health officials are mounting an enormous effort to push out the flu vaccine to more Americans. Vaccine manufacturers shipped out the first doses this August and are expected to produce up to 198m vaccine doses just for the US. Health officials hope this more than 10% increase in production will translate to an additional 20 million Americans getting vaccinated.

But even this extraordinary push assumes a huge proportion of America’s 328 million people will be left out. In 2019, less than half of adults got a flu vaccination, according to the CDC. Black and Latino Americans were less likely to receive a flu shot than their white counterparts.

Young and old alike have fallen behind on routine vaccinations due to the pandemic. GlaxoSmithKline reported one of its vaccines, called the zoster for adult shingles, experienced a 67% drop in sales in April and May of 2020.

Further, many common avenues for Americans to get vaccines remain closed. People working or learning from home will go without the on-site flu clinics often conducted in offices and schools. More may fear going to the doctor amid a pandemic.

A severe flu outbreak would pressure already thin supplies of medical equipment, tests and manpower, all of which are needed to fight Covid-19. It could also sow confusion, as patients with fevers and coughs from flu rush to hospital emergency rooms in fear of Covid-19.

“We don’t have therapeutics to treat or prevent Covid, and we don’t have vaccines to prevent Covid yet,” said Friedland. “But what we do have are vaccines that can help protect against influenza, and influenza vaccines make a tremendous difference in relieving stress on our hospital system.”

As Americans seek flu vaccines, their practical experiences may offer a preview of the future with a Covid-19 vaccine, if and when one is approved. Any approved Covid-19 vaccine will probably confer only temporary immunity, requiring a booster or annual shot.

In addition, approved Covid-19 vaccines must be at least 50% effective, per the US Food and Drug Administration, not too different from the 45% effectiveness of the 2019 flu vaccine.

“If it’s anything better than that we can all celebrate,” said Schaffner. “We have over-promised and we are at risk of under-delivering, because we have hyped the vaccine so much and spoken about it terms of, ‘We can essentially eliminate Covid.’ And I don’t think there’s any expert that thinks that.”

Similarly, flu vaccine researchers hope efforts to develop a coronavirus vaccine can translate to advances toward a “universal” flu vaccine, the kind that could confer long-lasting immunity and be quickly produced during a pandemic flu.

One of those researchers, Dr Emily Erbelding, director of the microbiology and infectious disease division of the National Institute for Allergy and Infectious Disease, said she believes new technology developed for Covid-19 holds promise.

“Things are moving faster in vaccine development than they ever have before,” Erbelding said. “I’m hopeful we will have an efficacious vaccine in 2021. That certainly is faster than any influenza vaccine was ever developed.”