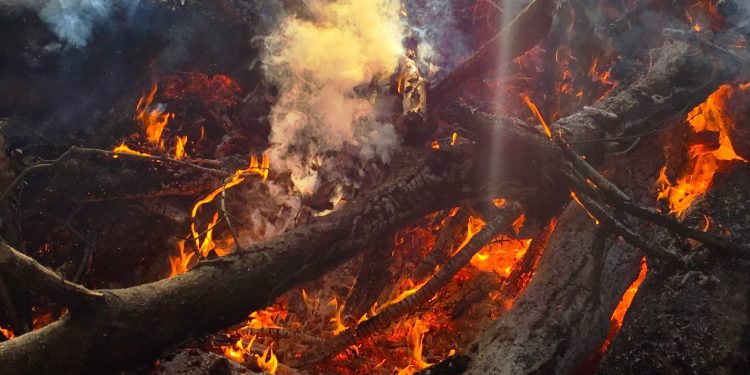 Brussels (Brussels Morning) Fire has spread to a thermal power plant east of Bodrum in Turkey’s southwestern area. Environmental groups are worried at what might happen if the flames reach the plant’s coal storage unit. Meanwhile, the authorities struggle with the massive wave of wildfires surging across the country.

More than a week since the first fires appeared, 16 uncontrolled blazes still raged in the countryside on Wednesday afternoon, according to the Turkish Forestry Ministry. The European Forest Fire Information System (EFFIS) reported that the current wave of wildfires ravaging Turkey has already affected three times the area burnt in an average year.

Eight people have died in the blazes so far, as opposition politicians decry the government’s firefighting policy as nonexistent. With criticism against President Recep Tayyip Erdoğan mounting, his government was forced to reveal that it has no operational firefighting planes available. It is dependent on other states for aid to help it battle the unprecedented outbreak of multiple forest fires.

Confusing reports about the government’s acceptance or refusal of offers of help have added to the sense of outrage now being expressed by the populace and the opposition. According to some reports, Ankara has refused assistance from its regional rivals Greece and Israel, rejecting the offer of firefighting planes so sorely needed to combat the fires in coastal areas.

Turkish officials claim that the Greek offer was rescinded as Greece started fighting its own wave of wildfires, while Israel claims the Turkish government politely rejected its offer of help, maintaining it had the situation “under control”.

On Monday, the EU sent three Canadair water-dumping planes to Turkey, two from Spain and one from Croatia, to join international aid teams from Russia, Iran, Ukraine and Azerbaijan that were already assisting Turkey combat the wildfires.

Many citizens complain of having been left on their own, forced to defend their homes with buckets and hoses. The opposition claims years of Erdoğan’s rule have left the country’s firefighting resources depleted and neglected, with no adequate preparations made for the current scenario. The government, on the other hand, claims its response has been well planned and coordinated.