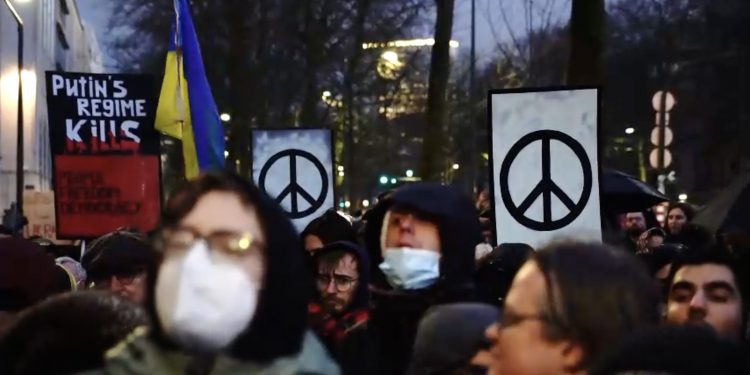 BRUSSELS (Brussels Morning) – More than five hundred people gathered in Regentlaan last night in protest against the Russian invasion of Ukraine. They met at the Permanent Representation of Russia to the EU.

“Putin, terrorist!” Several hundred people gathered on Thursday evening on the Inner Ring Road near the Arts Act, with a view of the Permanent Representation of Russia to the EU. Earlier in the day, his ambassador was summoned by the EU. Then it was up to the citizens to show their anger. Around 6.30 pm the police counted at least 500 people, enough people to ensure that cyclists could no longer ride on the bicycle path.

“What is happening in my country is terrible. All the attention should go to this, because we could use all the help,” said Igor, a Ukrainian living in Brussels. Igor was not surprised that Russian troops invaded Ukraine last night. “That had to happen one day. We are now busy with the war day and night, because we all have family there.”

His girlfriend shows a photo on her mobile of a rocket that landed on a field. “That was an hour ago, a kilometre from the house of my parents who live not far from Kyiv. Everyone is worried. I try to contact them every half hour,” Igor continues.

Hitting Putin in his wallet

Meanwhile, a protester lists some demands while shouting through a megaphone. “We want to see all possible sanctions. Putin must be hit in his portfolio,” they said. “As many weapons as possible should go to the Ukrainians.”

It is not only Ukrainians who are protesting. Some Belgians in solidarity also show up, in addition to Georgians, Belarusians, Poles and Russians. “I’m Russian, but I don’t support the president at all. He’s lost his head, he’s gone mad,” says a young lady. “Many Russians in my area think the same about him. We are concerned about the lives of the Ukrainians, but also those of the Russians.”

Earlier yesterday, the collective Ukrainians in Belgium organised a campaign in front of the Russian embassy on De Frélaan in Uccle.

Before that, there was a demonstration at 2 p.m. on Schumanplein. European trade unions had decided to demonstrate against the attacks on collective agreements and low minimum wages. The theme was changed after the Russian invasion.

More than a hundred Belgian and European trade unionists are asking Europe to do everything it can to achieve peace and democracy. They believe that this is the basis for a healthy working environment and social justice. They held a minute of silence for peace.