Feminists march in Paris ahead of International Women’s Day 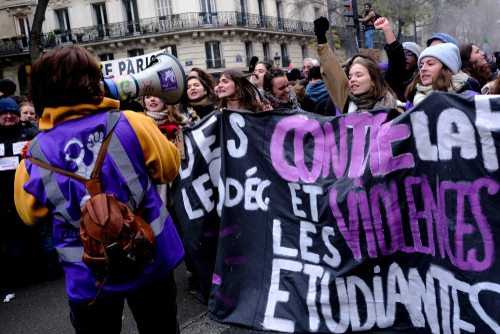 Hundreds of people marched in other French cities over the weekend, stressing that women face challenges in France and abroad.

According to Eurostat records, women earned on average 14.1% less than men in 2018, an earnings gap that has been increasing in the coronavirus crisis.

Some 6,000 people attended the demonstration in Lyon, according to the SUD Éducation 69 teachers’ trade union.

Demonstrators called for a general strike today, noting that women account for 80% of school teachers. Protesters added that women teachers earn 13.9% less compared to their male counterparts They also cited statistics claiming that one in eight school directors are women.

The protest went ahead in Nice despite pandemic-related health restrictions.

In Lille and Montpellier, protestors carried signs and banners demanding societal changes with regard to abortion rights, inequality between the sexes and gender-based violence, among other issues of concern.

In calling attention to the need to address domestic violence some pointed out how femicide had claimed the lives of 90 women last year. Other protesters demanded access to medically assisted pregnancies, a controversial issue that has divided France.

Feminist organisation Solidarité Femmes warned that 23% of female victims of domestic violence say their partners subject them to “economic violence,” which includes controlling expenses, preventing them from working and expropriating their wages, France24 reports.

Françoise Brié, a spokeswoman for the organisation, pointed out that economic violence can continue after separation.

She cited an analysis of approximately 13,000 cases of domestic violence in 2019, which showed roughly 20% of female victims stating they had been subjected to financial abuse.