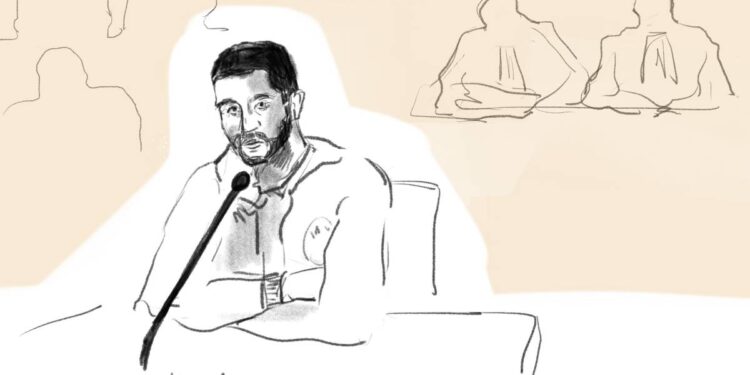 In the trial concerning the Belgian part of the investigation into the attacks of 13 November 2015 in Paris, the federal prosecutor’s office has demanded prison terms of 18 months, two years and four years against Zakaria Jaffal, Ibrahim Abrini and Abid Aberkan. According to the prosecution, the three each played a role in the preparation and aftermath of the attacks.

For example, Abid Aberkan provided shelter to Salah Abdeslam and Sofiane Ayari, after the two escaped the police on 15 March 2016 in Driesstraat in Forest.

“Aberkan does claim he couldn’t refuse because Salah was his cousin, but there was more,” the federal magistrate said. “He not only lets Abdeslam and Ayari hide with his mother, but also brings them food and clean clothes. He is also told BRUZZ , that Mohamed Abrini is also hiding somewhere in Brussels, with another group of terrorists. Aberkan does not inform anyone about this either. So he ensures that the terrorists can continue to hide while they prepare new attacks.”

Abid Aberkan himself was also highly radicalised, as he admitted, and was in close contact not only with Salah Abdeslam, but with various suspects in the attacks such as Mohamed Abrini and Ahmed Dahmani. He had also sworn allegiance to Islamic State, according to the federal prosecutor’s office.

“This is evident from several photos showing Aberkan pointing an index finger upwards, a clear sign of allegiance to IS at the time,” it said. “In the first years after the attacks, he showed little compassion for the victims and mainly saw himself as a victim. Since then, he has come a long way and a certain insight has come.”

Ibrahim Abrini, like his two brothers Mohamed and Suleyman, was radicalised, the federal prosecutor’s office said. “He sent 1,400 euros to his brother Suleyman, who had left for Syria, and after his death Ibrahim and Mohamed made plans to go to Syria themselves,” the federal magistrate continued. He also had contacts with Salah and Brahim Abdeslam, Abid Aberkan, and through Facebook with Abdelhamid Abaaoud and Youssef Bazarouj in Syria.

Ibrahim Abrini himself never went to Syria, but Mohamed did, in June 2015, for a period of three weeks. According to the federal prosecutor’s office, Ibrahim acted as his contact person in Belgium during that period. “After the November 13 attacks, he made a computer and clothes belonging to his brother Mohamed disappear, and he was the last contact of Ahmed Dahmani when he fled from Belgium to Turkey and wanted to cross the border into Syria.”

According to the federal prosecutor, Zakaria Jaffal was also invariably in the circles of Salah Abdeslam and Ahmed Dahmani, with whom he regularly watched IS propaganda, and so he had to know that they were radicalised. He is also said to have been there when the terrorists left Brussels for Paris on the night of 12-13 November.

“On November 13, he spent the whole day in the company of Ahmed Dahmani,” said the federal magistrate. “He was also there when Ahmed Dahmani bought a plane ticket to Turkey that day. He knew that Dahmani was radicalised and would receive an ankle bracelet a few days later. It can only be said that he knew that Dahmani would move on from Turkey to Syria to join ISIS.”

On that particular evening of November 13, at 9.40 pm, Jaffal received a telephone call from Ahmed Dahmani, which lasted barely 15 seconds, after which Jaffal immediately destroyed his SIM card. “He never wanted to say why he did that, but 9.40 pm is just the time when the terrorists who are going to invade the Bataclan in Paris send a text message with the message ‘ça commence’. It is not difficult to see a connection between both facts,” concluded the federal magistrate.