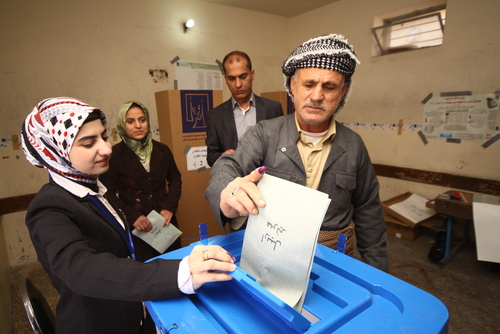 Paris (Brussels Morning) At least 32 people were killed and more than 100 wounded in a twin suicide attack in Tayaran market in the Iraqi capital, Baghdad.

The first explosion occurred as the suicide bomber walked into the market and claimed he was feeling sick, so that people would gather around to help him. He then detonated his suicide belt, Deutsche Welle reported. Shortly afterward and as people rushed to assist the wounded, a second bomber detonated an explosive belt, the Iraqi Interior Ministry said. Iraqi military spokesman Yehia Rasool added in a statement that the bombers blew themselves up while being chased by security forces.

Footage from the BBC and other outlets showed upsetting scenes of destroyed stalls and blood-stained streets.

Although Baghdad has become somewhat synonymous with suicide explosions in the past, this is a rare incident following almost three years of relative calm in the capital. The last major attack in Baghdad took place in January 2018, when at least 35 people were killed.

No group had claimed the bombings initially, leading many to suspect ISIS sleeper cells in the capital were behind the attack, according to the BBC. SITE Intelligence Group, which monitors extremist propaganda, said the militant group later claimed the attacks through Telegram.

Following major battles in and around cities held by ISIS the Iraqi government operation, backed by a US-led multinational coalition, declared victory against the jihadist group in late 2017.

However, sleeper cells of the group certainly remain active, namely in al-Anbar province and the outskirts of Mosul and Kirkuk, and wage low-level attacks against security forces in rural areas.

A report by the UN Secretary General in August 2020 noted “a surge in ISIL activity in Iraq and the Syrian Arab Republic and among some of its regional affiliates”, especially as fighters are able to move freely across the borders between the two countries and find safe haven in the mountainous region of north-western Iraq.

While measures to contain the spread of COVID-19 helped in keeping the risk of attacks relatively low, the report added that “the pandemic’s impact on ISIL propaganda, recruitment and fundraising activities remains unclear. Socioeconomic fallout from the crisis could exacerbate conditions conducive to terrorism and increase the medium-to long-term threat, within and outside conflict zones”.

ISIS is also trying to disrupt the return to stability, refusing to concede its territorial defeat. Sajad Jiyad, an Iraq-based fellow at the Century Foundation told the Washington Post that the group will try to show it is still relevant and capable of carrying out extreme violence. “Attacks hark back to painful memories when attacks on civilians were common. The government needs to restore confidence quickly and show it will not allow ISIS bombings to become a regular occurrence again”, he adds.

Iraq is returning to the stage of geopolitical tensions as Shi’a militias launch attacks against Western diplomatic targets and the US military responding with airstrikes. Numerous militias, many of them with links to Iran, are active in the capital and in major Iraqi cities, vying for popular support within a context of economic uncertainty fraught by pandemic restrictions.

Fears of return of violence as country enters election year

Many fear the return of violence in Iraq as the country heads for parliamentary elections, which were postponed from June to October this year to “resolve pending issues” and allow for “better preparation”, according to the office of Prime Minister Mustafa al-Kadhimi.

The decision to postpone the elections came after a meeting of the country’s president, prime minister, speaker and the head of the Supreme Judicial Council with officials from the Electoral Commission. A statement further indicated that postponing the process would give time for candidates, political alliances, new political forces and young people to register and submit candidate lists, Al-Monitor reports.

Although the ballot was initially to take place in 2022, Mustafa al-Kadhimi moved to announce an early election, partly in an attempt to appease anti-government protests. Large demonstrations erupted in October 2019, calling for better economic conditions and access to employment and equal opportunities, while also asking for fairer elections and changes to Iraq’s voting process and elections committee.

But Iraqis are growing disillusioned with the slow pace of reforms and fear the government will ignore their demands and not hold to account those responsible for the country’s poor security and institutional uncertainty.

The twin attack further underlines the security challenges facing the authorities in Iraq after the US reduced its troop presence in Iraq to 2,500 during the last months of the Trump presidency, the Wall Street Journal reported. Fuad Hussein, the Iraqi foreign minister told Al-Jazeera that the country lacks training, experts, weapons and still needs to share intelligence. Iraqi MP Sarkawt Shamsulddin told Middle East Eye: “It might be too early to know who exactly stands behind the explosion, but it is clear that our security system needs to be depoliticised and better trained for urban communities.

Iraqi President Barham Salih condemned the attack, saying in a tweet: “The two terrorist explosions targeting innocent people in Baghdad at this specific time confirms the attempt by the groups of darkness to target all national entitlements and our people’s aspirations for a safe future”.

Several governments and organisations have condemned the attack. Pope Francis who plans to visit Iraq in March deplored a “senseless act of brutality”. The UN mission in Iraq tweeted that “such a despicable act will not weaken Iraq’s march towards stability and prosperity”.

Acting US Secretary of State Daniel Smith said the bombings “were vicious acts of mass murder and a sobering reminder of the terrorism that continues to threaten the lives of innocent Iraqis”, while Foreign Policy notes that “the attack serves as a reminder that Iraq needs to be on the Biden administration’s agenda, even though it does not appear to be a priority at all”.