Far Right terrorism is a transnational challenge. Time to start treating it like one. 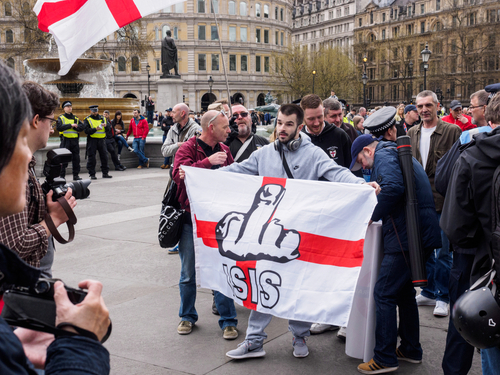 While it is commonplace to talk of Jihadism as a global challenge, the way we deal with the Far Right is “nationally fragmented,” as their political language makes reference to racial and cultural hierarchies that are articulated as extreme nationalism. There is good reason for a more pan-European approach to the challenge at hand.

Rightwing terrorism is a wide ideological spectrum of movements that call for political violence in the name of racial purity, affirmation of national and racial hierarchy (white supremacy) or cultural and religious supremacy.  The online fusion of all these ideological trends on common platforms creates a Hydra that empowers each network individually.

As a  community, the platform bombards the individual with various messages, seeking engagement. These messages are usually framed as the product of “investigative journalism” and “top analysts” who wish to awaken their audience, creating an alternative and presumably more accurate message to that articulated by “mainstream media.”

At times, this messaging may reference a “mystic” source of legitimisation, not unlike Jihadis. The Far Right has its own set of prophets, rituals, and spiritual leaders.

To discuss the pan-European dimension of the Far Rright, Brussels Morning discusses with Ismail Ertug MEP (SPD, Germany), Vice-Chair of the Group of the Progressive Alliance of Socialists and Democrats in the European Parliament.

Welcome Shift of attention to the Far Right

Crimes by rightwing extremists have hit their highest level since 2001 in Germany, according to  a public broadcaster DW report. This trend is the culmination of a growing online space for the Far Right on social media platforms – mainstream and “niche” – that include chat applications and blogposting. The common denominator is incitement to violence.

“The COVID-19 pandemic has further accelerated the trend to a highly polarised society. Due to social distancing and lockdowns, time spent online increased dramatically. And rightwing groups used the public dissatisfaction to spread extremist propaganda online. The internet is the perfect tool to reach a broader audience, plan events, finance and recruit”, Mr. Ertug notes.

A 2021 report by the Radicalisation Awareness Network suggests that conspiracy  theories “often serve as a ‘radicalising multiplier,’ as they serve to affirm radical beliefs and in-group loyalty. Not surprisingly, conspiracy theories constitute a powerful recruitment tool for extremist  ideologues and, conversely, extremist ideologies can be conducive to conspiracy theories.

“Conspiracy theories featuring anti-Semitism, anti-immigration and anti-Islamic rhetoric are mixed up with disinformation about COVID-19 and technophobic narratives about 5G via Telegram, Discord, WhatsApp or YouTube”, Mr. Ertug adds.

The Question of Regulation

The political consensus in Europe is that research engines and Tech Giants or the Big Five (Facebook, Google, Apple, Microsoft, and Amazon) have a responsibility to filter out hate discourse, including rightwing extreme propaganda. If not, EU member states should come up with a solution, in a joint campaign to tackle radicalisation. .

Mr. Ertug believes that, even if the EU is only catching up to technological developments, the regulatory steps taken are in the right direction.

“It was only this year that the EP approved new rules to help fight the spread of terrorist content online while safeguarding freedom of expression and freedom of information. The new rules give authorities in EU member states the ability to make sure hosting service providers like Google or Facebook remove online terrorist content as quickly as possible ”.

Rightwing terrorists tend to target communities and public spaces with the objective of creating chaos and maximising the effect of the attack. The shootings that we witnessed in Hanau, a small city in western Germany, is a textbook example. The town was considered a shining example of co-existence, respect and community flourishing. That is why it was chosen, to shake EU’s values of respect, democracy and plurality.

Unfortunately, communities tend to be terrorised, creating an action/reaction vicious circle. That is why the EU should introduce initiatives to the public that expose the discriminating propaganda and the groups that represent it. The public should be well informed about the ideology, the groups and their modus operandi. That is when minorities can feel safe and have an expectation they will be protected.

According to EUROPOL’s press release,  the threat posed by copycats has been growing. The terrorist attacks in Christchurch (New Zealand), Poway (USA), El Paso (USA), Bærum (Norway), and Halle (Germany) constitute a worldwide phenomenon, in a chain of incidents in which the perpetrators share via transnational online communities and take inspiration from one another.

“In June 2021, Frankfurt am Main city’s Special Task Force (SEK) was disbanded following the discovery of Far Right extremist messages in group chats. Some of the police forces were on duty during the anti-immigrant attack in Hanau in February 2020. The killer was motivated by xenophobic and racist ideology which he disseminated on his own website. A rightwing extremist attacked a synagogue in Halle in October 2019. He was inspired by the terrorist attack in Christchurch. A rightwing extremist assassinated a German conservative politician in June 2019”, Mr. Ertug underlines.

“The European Union must support the member states coping with the problem, as it is not limited to borders. Rightwing groups are a serious threat to our democratic society. Copycat terrorism is becoming the new modus operandi inspired by previous terrorist attacks”, Mr. Ertug adds.