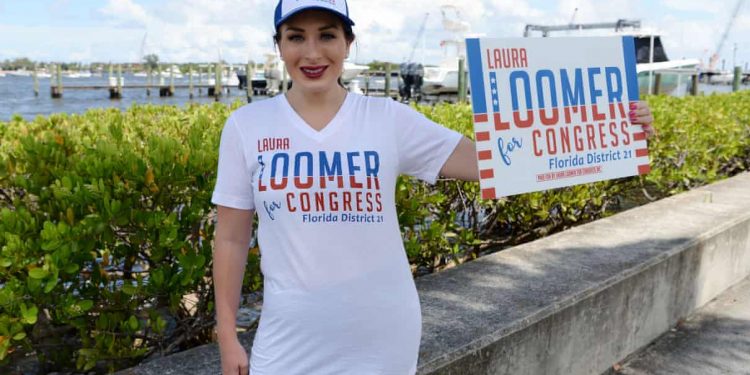 A far-right social media provocateur whose hate speech got her banned from social media won her Republican primary on Tuesday and will challenge the Democratic representative Lois Frankel for Congress in November.

Laura Loomer won praise from Donald Trump early on Wednesday, who tweeted that she had a “great chance”, despite her Florida district being deep blue.

Loomer has been a political fixture for decades in the Palm Beach county district, which is firmly Democratic, and has been banned from some social media sites and ride-share sites after anti-Muslim comments.

Loomer has been a guest on Fox News and alt-right programs after gaining followers by ambushing journalists and politicians in stunts posted online. Her campaign adviser is Karen Giorno, a political strategist who worked for Governor Rick Scott and Trump’s 2016 campaign in Florida.

Donors have contributed millions to her campaign.

Elsewhere in Florida, Ross Spano, a Republican congressman dogged by ethics investigations, lost his primary challenge on Tuesday, becoming the eighth incumbent House member to be defeated in party primaries this year.

The US Department of Justice is investigating Spano for alleged campaign finance violations. The House ethics committee was looking into allegations that Spano borrowed more than $100,000 from two friends and then loaned the money to his campaign. But it paused the review when the criminal investigation began.

The district sits east of Tampa in central Florida and has traditionally voted Republican. Franklin will face Democrat Alan Cohn, a former television journalist who had raised about $600,000 for the race as of 29 July.