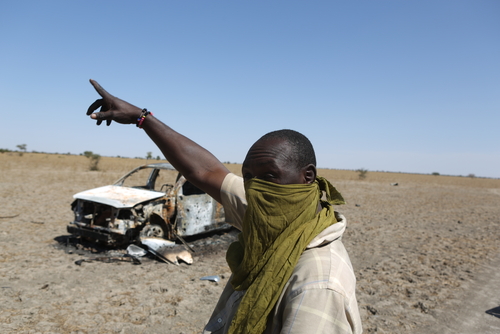 Brussels (Brussels Morning) The Islamic insurgent offensive on the northern Mozambique town of Palma threatens to create a humanitarian disaster, with thousands of citizens displaced and hundreds missing, while also threatening the country’s plans for economic recovery through valuable LNG extraction contracts.

The attack forced the French oil and gas giant Total to cease work on its nearby facility, a 20-billion dollar investment, with hundreds of local and foreign workers left scrambling to find shelter within the city.

A late-night attempt at a breakthrough from the besieged Amarula Palma Hotel ended with only seven out of a 17-vehicle convoy reaching the safety of a nearby beach. Some 50-to-60 people in the missing vehicles are presumed dead or captured. At least seven people in the remaining vehicles were killed, and many more were wounded.

A South-African private security contractor, the Dyck Advisory Group (DAG), hired by the Mozambique government to assist in holding back the insurgents, performed strafing runs on Islamist positions within the city, and helped with evacuations of survivors. Hundreds of people were rescued from the beaches during the weekend.

The Ansar al-Sunna reportedly ravaged most of the city on Saturday and Sunday, destroying infrastructure and setting fire to hotels and buildings, including a local clinic.

The Islamist group, which has ties to the Central African province of the Islamic State, has risen to prominence since the insurrection that began in 2017. It has recruited many impoverished and unemployed young boys in the Cabo Delgado region.

The attacks on the region threaten an estimated 120-billion dollars worth of planned LNG investments, which the Mozambique government counted on to help lift the country out of severe debt. The most recent attack on Palma forced Total to abandon construction for the second time this year, while ExxonMobil decided to postpone its own planned 30-billion dollar investment into LNG infrastructure.