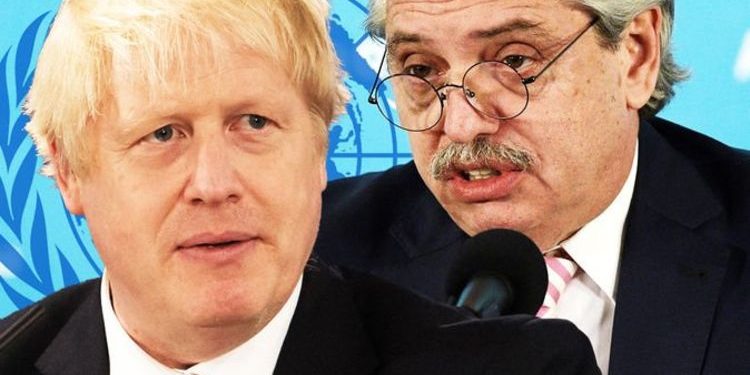 ARGENTINA will step up its renewed push for sovereignty over the Falkland Islands at a meeting of the UN’s general assembly in November, while seeking to exploit anti-British bias in some quarters, an expert in the history of the remote archipelago has said.

Graham Pascoe recently published Falklands Facts and Fallacies, in which he examines the history of the islands and attempts to counter a narrative put forward in the 2016 book Las Malvinas entre el Derecho y la Historia (The Malvinas between Law and History). And he told Express.co.uk Buenos Aires had a long history of attempting to use the UN as a vehicle for its ambitions – while predicting all such efforts were doomed to fail as a result of UK Government’s power to veto resolutions.

The United Nations Decolonization Committee, known as C24, last month unanimously approved a resolution on Wednesday calling on the UK and Argentina to resume sovereignty negotiations over the Falklands – a move which Mr Pascoe told Express.co.uk would have “no effect at all”.

He added: “Argentina will undoubtedly continue to use the UN to press its case, probably at the meeting of the General Assembly in November/December, and no doubt under the strong influence of Cristina de Kirchner, who is a Falklands (or rather “Malvinas”) hardliner and highly influential within the Argentine government.

“But I don’t think it’ll make any difference, and the UK government will ignore it – only a Security Council resolution would have any clout, and the issue just isn’t important enough for that.

“In any case, the UK has a veto there of course.”

Mr Pascoe said: “Argentina has always used the UN to further its case for sovereignty over the Falklands – it is significant that Argentina has never taken its case to the International Court of Justice.

“As a court that would have listened to the evidence, which, as demonstrated in Falklands Facts and Fallacies, actually shows that the Falklands are British and Argentina has no title to the islands whatsoever.

“By contrast, the UN is more like a parliament where voting follows the political interests of the members, not the factual evidence.”

Until 1964, Argentina had made only “brief formulaic references” at the UN to its claim on the islands, but the situation changed when Jose Maria Ruda, the country’s UN representative, delivered a lengthy speech on the subject which Mr Pascoe said “would be hard to beat for sheer concentrated inaccuracy”.

Mr Pascoe added: “Naturally Argentina does indeed withhold information to make their case more persuasive – they never mention the Convention of Peace, which definitively ended the Falklands dispute between Britain and Argentina in 1850.

“They fail to mention the UN resolutions that give self-determination to the Falkland Islanders (especially Resolutions 1541 and 2625).

“And they present a totally false version of history, eg they constantly maintain that Britain expelled a peaceful Argentine population from the Falklands in 1833.

“In fact Britain only expelled the mutinous, murderous Argentine garrison, who had been in the islands for less than three months, had murdered their commanding office in cold blood and had terrorised and traumatised the civilian residents, whom Britain encouraged to remain in the islands – and most of them did so.”

In his book, Mr Pascoe argues the C24 has been “hijacked” by Argentina.

He explained: “Many of the members of the C24 are either Spanish-speaking, or former colonies, or non-democracies, and they regularly repeat the false statements made by Argentina.

“Since 1964 the United Nations Decolonisation Committee, the C24, has been regularly misused by Argentina as a forum in which to present its territorial ambition of taking over the Falkland Islands, and the C24, to its shame, has permitted Argentina to subvert the Committee’s discussion of the Falklands to that end.

“Every year a high-level Argentine delegation attends the Committee’s sessions in New York and Argentine speakers present the standard, untrue, Argentine account of the case and receive loud applause from the Argentinians present, whereas the Falklands petitioners are heard in stony silence, even though they are the people representing the territory concerned.

“Representatives of the C24 have sometimes visited non-self-governing territories (though never the Falklands or Gibraltar, despite repeated invitations from both), and in 2010 Donatus Keith St Aimee, the UN representative of St Lucia, who was then the chairman of the C24, visited Argentina – but he refused to visit the Falklands!”

The decision taken by Mr St Aimee, who died in 2015, was “very clear evidence of anti-Falklands (and anti-British) bias”, said Mr Pascoe.

Express.co.uk has contacted the United Nations, and the Argentinian embassy in London, to offer them a chance to comment on Mr Pascoe’s remarks.