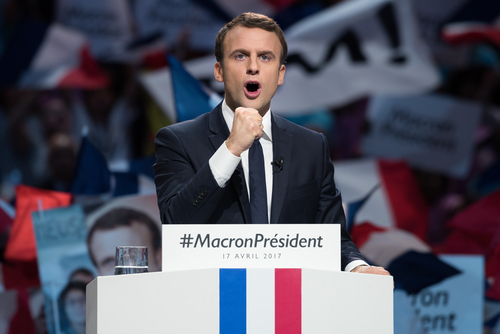 Belgium (Brussels Morning Newspaper) As incumbent French President Emmanuel Macron is facing a tight run-off against repeat challenger Marine Le Pen, he has softened his stance on his planned pension reform, walking back on his calls to raise the minimum retirement age from 62 to 65.

Macron told journalists on Monday that he was prepared to delay his pension reform plans, and lower the planned minimum retirement age to 64, in an “effort to build consensus”.

“I’m not going to pretend nothing happened,” said Macron during his visit to northern France. “I have heard the message from those who voted for the extremes, including those who voted for Ms. Le Pen. I am ready to change the timeline and say we don’t necessarily have to implement the reform by 2030 if people are too anxious.”

Macron’s retreat on pension reform comes as polls are indicating he is only a couple of points ahead of Le Pen in the run-off, with turnout expected to be lowest in years – indicating many of the voters who chose him over Le Pen in 2017 might opt to stay at home on 24 April.

The incumbent president took a severe blow in the weeks ahead of the first round, with his insistence on raising the retirement age to 65 boosting the figures of both right-winger Le Pen and the far-left candidate Jean-Luc Mélenchon, who have finished second and third in the first round of presidential elections, separated by only a couple of percentage points.

With the protest vote appearing the key to the current elections, Macron was fast in softening his most controversial campaign pledge. Le Pen immediately responded by accusing him of making “a ploy” to salvage his chances.

“The French are very smart,” Le Pen told Inter radio on Tuesday. “Everyone knows this is a ploy by Emmanuel Macron to try to win over – or at least mollify – left-wing voters. The reality is, retirement at 65 is his obsession. It’s all he has ever talked about.”