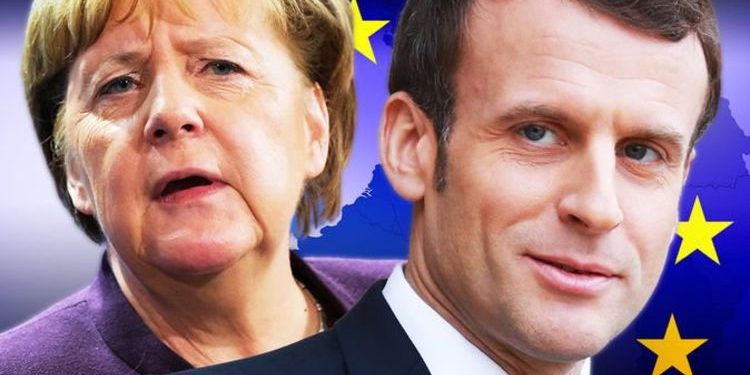 THERE are deep divisions within the eurozone, a former German MEP has warned, as Berlin and Paris clash over new rules.

Hans-Olaf Henkel, a frequent critic of the monetary union, warned the eurozone‘s attempt at solidarity would simply end up in irresponsiblity – suggesting Britain was wise to have opted against signed up for the single European currency. And he said Germany was being manoeuvred into accepting rules requiring its banks to prop up member states, in accordance with what is referred to as the Third Stage of the Banking Union, by France despite widespread internal resentment – suggesting Paris had everything to gain, and Berlin everything to lose.

Mr Henkel, who stood down from the European Parliament last year, told Express.co.uk: “The first Euro crisis in 2010 was sparked off by Greek and French Banks, not German ones.

“It was in Greece that banks were rescued at that time. But it is not widely known that in fact French banks were the main creditors of Greek banks and benefited most from the Greek bailout.

“In reality, she bailed out France!”

Mr Henkel added: “This game has just now been repeated with the EU-Corona aid package.

“It looks as if Italy is being rescued but it is overlooked that also here French banks are the major creditors of Italian banks!

“No wonder that it was again a French President, Mr Macron, who leaned heavily on Ms Merkel to agree to it.”

Mr Henkel said France – which he said effectively meant the EU as a whole – was forcing the new Third Stage rules on Germany.

He warned: “This in fact would mean that German savers vouch for the mistakes if Italian, Greek or French bank managers.

“I cannot imagine that a British citizen would ever agree to vouching for banks in other countries.

“Germany has not yet agreed and most German savings banks also disagree.

“However, that opposition will also fade away in the spirit of ‘solidarity’.

“In this case, solidarity will result in irresponsibility.

“As such, the Banking Union will be a system of organised irresponsibility.”

He added: “The eurozone shows perfectly why it makes no sense to change economies to fit a common currency.

“On the contrary, a currency should rather fit the reality of a country’s economy.

“In other words: it was wise for Britain to keep the pound and it was foolish for Germany to give up its D-Mark.

“Of course the economic downturn of the eurozone cannot be a surprise to anyone.

“However, even before the corona crisis, the eurozone lagged seriously behind not only the world but also those EU countries which are not in the eurozone.

“No wonder that countries like Denmark, the Czech Republic, Sweden and Poland have no appetite to join the common currency.