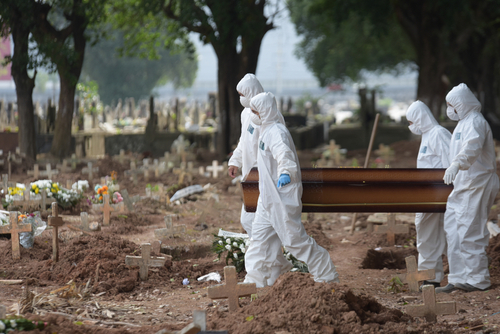 Brussels (Brussels Morning) EU countries suffered at least 450,000 excess deaths in 2020, according to the latest Eurostat report, which collated member-state figures for the period between March and November.

Eurostat drew on monthly data from 26 member-states (Ireland did not provide figures). The agency compared the data with the number of deaths that were recorded each month in individual member-states during the preceding four years.

The period monitored in 2020 showed there had been at least 450,000 more deaths recorded than in the previous four years in the 26 member states. As the data for December 2020 was not yet in at the time the report was being prepared, it is likely the final toll will be even higher, especially since many EU countries were still in the grips of the deadly second wave of coronavirus pandemic..

“The data gives a general measure of the mortality impact of the COVID-19 pandemic because it includes all deaths independently of their causes,” Eurostat stated in a press release. Even though the figure cannot be directly attributed to coronavirus fatalities, it paints a clear picture without having to compare different countries’ different criteria for attributing deaths to COVID-19.

Two clear peaks emerged in the data – coinciding with the two waves of the pandemic recorded so far. As the first wave reached its peak in April 2020, countries recorded a significant growth in excess mortality, with Spain reporting an 80% increase in deaths compared to the same period in the previous four years, while Belgium reported a 74% increase.

The November peak was particularly deadly in Eastern Europe, with Slovenia, Poland and Bulgaria recording 90% increases in deaths. “The excess mortality in the EU was 8% above the average in September, +17% in October and +40% in November, with the indicator rising in all EU Member States,” Eurostat noted.