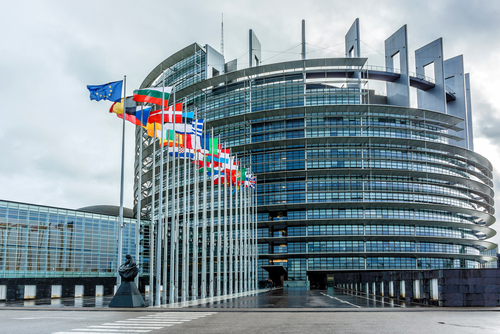 STRASBOURG, FRANCE - DECEMBER 21, 2014: Exterior of European Parliament (Louise Weiss building, 1999) in Wacken district of Strasbourg. It is one of biggest and most visible buildings of Strasbourg.

Brussels (Brussels Morning) The European Parliament voted to sue the European Commission on Thursday for what it sees as its failure to apply new laws on the rule of law.

More than 500 MEPs voted in favour of the move, 28 abstained and 150 voted against taking the EC to the EU Court of Justice (ECJ) for not applying regulations that came into force this year by which the bloc can deny access to EU funds to member states for failing to respect democratic norms and the rule of law, Reuters reported.

MEPs warned that the EC’s failure to act increases the chances of Hungary’s Prime Minister Viktor Orbán’s re-election next year. The EC had previously accused Orbán of eroding freedoms and democratic standards in Hungary.

Besides Hungary, the EU is investigating Poland for alleged violation of the rule of law, and both countries could lose access to EU funds worth billions of euro according to the new regulations.

German MEP Theresa Reintke of the Greens stressed “people in Poland, Hungary and elsewhere need to know that the Commission is on their side and will fight for their rights as EU citizens”.

The EP, she said, was “taking action against the Commission to make them do their job and defend the rights” of EU citizens.

According to the EP resolution, the EC has two weeks to take action or face the legal process which the EU Parliament will prepare in the meantime.

The EC has pointed out that it plans to implement the new law once the relevant guidelines are prepared, but this has been delayed by challenges from Hungary and Poland and could take years.

European Commissioner for Budget and Administration, Johannes Hahn, appealed to MEPs not to sue the Commission, noting that the EC would present the Parliament with draft guidelines in two weeks.