by Nafez Sami
in Features, Parliament 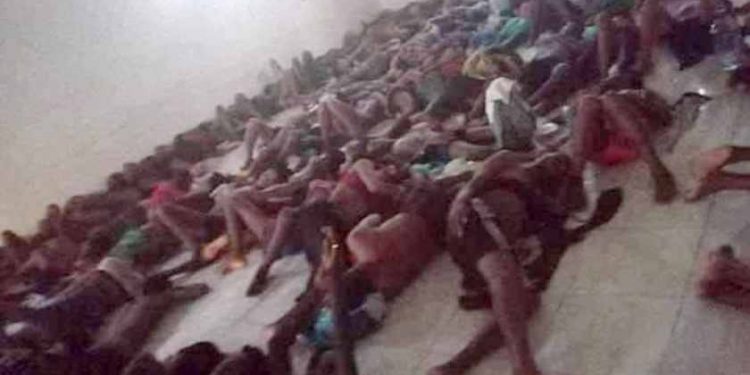 The footage which was published by the UK Telegraph Newspaper as part of an investigation, shows a man speaking in the video ‘As you can see it’s filthy here’ horrifically the images go beyond filthy where no human beings or even a living animal could possibly survive these conditions which make it the least a home for diseases.

The images were terrifying where some of these photos show the toilets are flooded with sewage to the places where these men have to eat and sleep and as the speaker in the video describes the situation he says ‘sewage spills to where we sleep’.

Some images show men were beaten viciously by guards, who have been also racially abused them according to the inmates. Reports have been released in the past few months to say that tens of thousands of people have been caught up in Saudi raids targeting unauthorized migrants who are in camps of pending deportation.  The Telegraph has published its investigation first on Sunday which drew wide condemnation and criticism around the world from governments, human rights organization, politicians and activists.

Brussels Morning sought for reactions from various European politicians. Ms Huatula Heidi MEP, member of Human rights committee in the parliament and the Vice president of the European parliament expressed her shock of the conditions of the African migrants and called for an urgent action.  She told Brussels Morning Newspaper that “these images and stories are indeed shocking; during the Covid19 pandemic there are numerous examples of harsh and cruel exploitation of migrant workers, from South and South East Asia like Saudi Arabia,” Human organizations have been trying to force Saudi Arabia to change its policy towards migrant workers regarding the Kafala (Arabic word for sponsorship) system which restrains the workers of many rights such as change of jobs or even free of movement in the country self

Ms Hatula added that, “Those migrant workers are left stranded in more wealthy countries, after the economic lockdown. They are often left without wages, in serious debt after paying recruitment fees etc. Their situation is even more horrible because the countries do not allow unions” Ms Hautala added further more ‘There is no excuse for such a wealthy country like Saudi Arabia to justify such treatment of vulnerable people in torturous conditions’.

The vice president of the European Parliament continues to say that there should be serious steps taken against countries that participate in such exploitation of migrants and she also added ‘ EU should put in place trade policy instruments to stop imports of products produced with forced labor and other forms of serious exploitation of workers.  We have asked Ms Hautala if sanctions can be a deterrent to stop the continued abuses by Saudi Arabia; she replied “Countries that do not respect human rights should not participate in sport games or any other international event. Many human activists have been calling to impose sanction on the kingdom reclaiming that the country has been abusing workers from countries such as India, Ethiopia, Bangladesh, Pakistan and other nationalities. Brussels Morning also talked to  Mr. Charles Goerens  MEP, member of the subcommittee on human rights, vice-chair Constitutional Affairs has urged the EU to immediately team up with United Nations agencies to protect migrant workers in Saudi Arabia.

He commented ‘It would be ideal if the EU would reach a strong partnership with the UNHCR to monitor the conditions and treatment of migrants in Saudi Arabia thus their fundamental rights are protected.

“Furthermore, the EU would set a strong signal by putting the overall issue on the next G20 meeting.”he added  It’s noteworthy that Saudia Arabia is subject to harsh criticism from the International community due to human rights violations and abuse of migrants and has a history of conflicts with human rights organization that have been calling to protect migrants rights; for instance Amnesty international organization has published on 30th April 2020 a many pages report titled ‘abuse of migrant workers impossible to ignore’ and has called for an action plane for change.