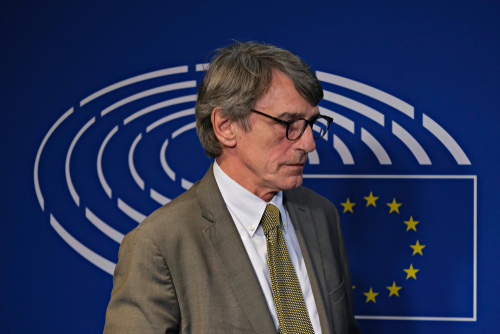 David-Maria Sassoli, an Italian reporter and former television news anchor who parlayed his journalism career into a second act as a socialist politician and an almost-accidental term as European Parliament president, died Tuesday at a hospital in Aviano, Italy. He was 65.

Sassoli died just days before the end of his term as president of the 705-member Parliament, which is due to elect his successor in Strasbourg next week. He had been battling serious illness, including pneumonia, since September and had been hospitalized multiple times, most recently on December 26.

His death, shortly after 1:15 a.m., was announced by his spokesman, Roberto Cuillo.

In September, Mr. Sassoli was taken to hospital in Strasbourg where he was treated for a severe case of pneumonia caused by legionella. He later told his followers on social media that he had suffered a relapse while recuperating in Italy.

He worked remotely during October, officially resuming his political duties in November. But he was again hospitalised on 26 December, Italian media report.

“Pneumonia is an ugly beast the important thing is to avoid relapses and the convalescence must be adequate,” he told Italian outlet Corriere in September.

A vote to elect his replacement had already been planned for later this month, and Mr. Sassoli had indicated that he would not seek re-election.

Sassoli was born in Florence, on May 30, 1956, and, according to his official biography, went to work at a young age as a journalist with small newspapers before moving to Rome to join the staff of Il Giorno, a Milan-headquartered daily newspaper.

In 1992, he shifted to television, beginning as a correspondent for TG3 and soon became a fixture on news programs on Rai Uno and Rai Due. He became a special correspondent at TG1 in 1999, and spent a decade managing the main editions of the channel’s news programs. He was named deputy director of TG1 in 2007.