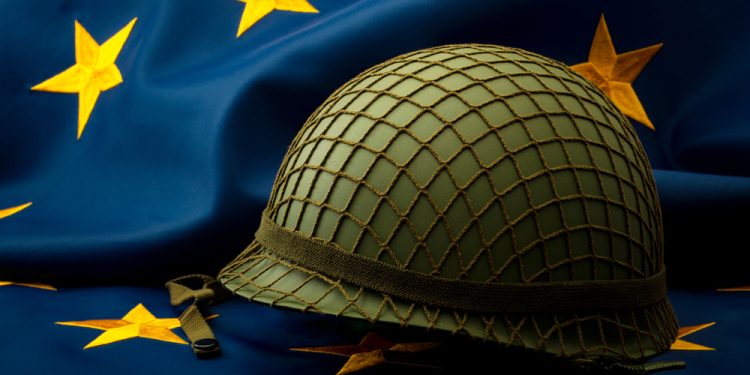 European union army, military uniform and defense of Europe concept with soldier helmet with camouflage pattern and the EU flag in the background

Brussels (Brussels Morning) Europe gets very little defence for its money.  The European defence industry is fragmented and focused on national rather than EU-wide priorities; spending goes on salaries rather than being invested in capabilities and training. A multitude of weapon systems comes at high costs and with complicated inter-operability challenges.

While US criticism focuses on how much Europe spends on defence, the quality of its spending is just as problematic.

EU Research and Development programs try to complement rather than compete with national defence industries. EU weapons manufacturing is still very much an industry dominated by “national champions.”

Focusing on creating pan-European weapons systems, the EU is taking a traditional approach to the defence sector. The main “functional logic” is that by streamlining procurement policy and consolidating weapons, the EU will de facto end up with a common European and Security policy.

As the Brexit experience with Galileo shows us, losing access to a military capability developed by EU agencies can be quite costly and operationally significant. The same can be said of Airbus.

The recently adopted 13 billion euro European Defence Fund is timid. This sum is to be spent over seven years, which means that the annual budget is minuscule compared to Research and Development in France, Germany, Italy, and Spain.

Still, having a European fund is a leap forward as defence spending has for decades been considered a national affair.

“All these efforts will have to monitor closely the geopolitical trends as well as the new threats, compelling us to continuously improve our military tools if we are to succeed against our adversaries in whatever nature they will challenge us: traditional, hybrid, cyber or – probably – a combination of all these dimensions”.

The EU’s Permanent Structured Cooperation (PESCO) framework is part of the EU’s security and defence policy (CSDP) in which 25 of the 27 national armed forces pursue structural integration. The EU has put in place a number of institutional instruments designed to consolidate common defence capabilities. These include:

Earlier this month, the EDA announced the two winners of its 2020 Defence Innovation Prize.

This year’s contest focused on Unmanned Aerial Vehicles (UAVs) and emerging capabilities that EU member states do not currently have “as standard”.

The first prize went to the Centro Italiano Ricerche Aerospaziali (CIRA) for the development of SWADAR (Swarm Advanced Detection And Tracking).

The second winning project is called Full-Duplex Radio Technology for Enhanced Defence Capabilities Against Drone Swarms and was developed by Estonia’s Rantelon in cooperation with Tampere University in Finland.